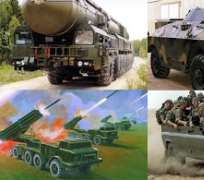 As Russia plans to increase its presence on the African continent's weapons market with the latest military agreement to supply Angola with highly powerful military equipment such as Su-30K fighter jets, build an ammunition plant and provide maintenance services estimated at $1 billion, experts have raised several questions among them whether Russia is rearming Africa at the expense of development and helping to accumulate debts replicable of Soviet times.

In October last year, the Voice of Russia (VoR) reported that Russia had written off more than $20 billion worth of African countries' debts. These debts were accumulated through arms and weaponry supplied during the Soviet era, the VoR quoted the Director of the Department of International Organizations of Russia's Foreign Ministry Vladimir Sergeev.

Irina Filatova, a professor emeritus from the University of KwaZulu-Natal in South Africa and also a professor at the National Research University, Higher School of Economics in Moscow and author of the book “The Hidden Thread: Russia and South Africa in the Soviet Era” has offered this comment: “Undoubtedly, much of Russia's exports to Africa consists of military equipment – Russia has not found a market for many of its other exports in Africa. This is obviously a solid source of funds for Rosvooruzheniie and ultimately for Russia's budget. From my point of view, this not a very good allocation of funds by African counties, e.g. by the Angolan government, but if this is what they want, there is no reason for Russia not to satisfy their wishes and not to make money out if it – every other arms producer in the world would.”

The Su-30K fighters in question are a batch of aircraft that were initially supplied to India in the late 1990s, prior to Delhi receiving the more advanced multirole Su-30MKI variant. They were returned to Russia in 2007, Vedomosti said, and have since lain idle in a Belarusian repair plant. They had previously been offered to Belarus, Sudan and Vietnam. Also on the list are Mi-17 transport helicopters, tanks, artillery, firearms and ammunition, according to the news report.

Rosoboronexport will conduct maintenance for Russian-made military equipment used by the Angolan military, the report said. Rosoboronexport and the Russian Defense Ministry have made no official comment on the alleged deals, which Vedomosti said were signed during Russian Deputy Prime Minister Dmitry Rogozin's trip to Angola, Russia's geopolitical ally since the Soviet era.

In the past, just as India sent back Su-30K fighters it had purchased, Algeria also returned 15 Russian MiG fighter jets claiming they were defective. The 15 MiG planes supplied to Algeria were the first stage in an $8 billion contract. According to reports, the first planes delivered back in March 2007 contained sub-standard parts.

The Indian Air Force has ordered more than 200 Su-30MKIs in a number of batches. The early models delivered were basic aircraft without features like canards and thrust vector controls, and it is these 18 early model aircraft (ten Su-30MK and eight Su-30K fighters delivered between May 1997 and December 1999) that were returned to Russia and replaced with more advanced Su-30MKIs.

India had intended to upgrade these aircrafts but instead used them as part-exchange for new aircrafts. According to Air Forces Daily, they were retired in 2006 and sent to the 558th Aircraft Repair Plant at Baranovichi in Belarus, a former Soviet republic, between August and November 2011. They remained at Baranovichi as the property of Irkut Corporation.

In June this year, Rosoboronexport deputy general director Alexander Mikheyev said that if a customer was willing to buy the Su-30s, Rosoboronexport was ready to repair, upgrade and deliver the aircraft within four to six months. At that time, four ex-Indian Su-30s were being refurbished.

Last year, at the time of the September Africa Aerospace and Defence show held outside Pretoria, Mikheyev said that Russia was ready to export Su-30s to Africa, especially to countries like Uganda, Angola and Ethiopia. Angola received six Su-30MK2 multirole fighters in 2012.

The rationale behind the latest Angolan purchase of second-hand old airframes that have been in open air storage for many years (both in India and Belarus) does not make any sense, many experts said in an interview with this correspondent.

Notwithstanding the reconstruction needs of the country, Angola is awashed with petro-dollars but should really go for more capable platforms that would cement its position as an emerging regional power, rather than buying what in essence are junk aircraft that are probably barely airworthy and are likely very maintenance-intensive.

By the way, it is not the first time Russia has sold less-advanced, outdated or even below standard military equipment and arms to Africa, says Dr Shaabani Nzori, a graduate of the reputable Gubkin Oil and Gas University, an independent oil and gas expert and foreign policy analyst based in Moscow.

“What we see is that Russia and its leaders, always try to offload their useless, outmoded and obsolete machinery and equipment to Africa, and surprisingly, the Angolan leadership is accepting this!” he said, and added, “of course, Africa should not stop buying Russian arms. What is really needed is for African governments themselves to be more demanding that they get the right, modern arms and military equipment and not accept to be a waste bin and dumping grounds for Russian obsolete machinery,” Shaabani suggested.

Professor David Shinn, an adjunct professor at the Elliott School of International Affairs George, Washington University and a former U.S. ambassador to Ethiopia (1996-99) and Burkina Faso (1987-90), wrote in an email interview to Buziness Africa media that with the latest development on the condition of the particular SU-30K aircraft purchased by Angola, one has to ask why Angola needs such a high performance fighter aircraft and who is the potential enemy?

“Angola is an oil-rich country and can afford this purchase but it seems the money could be put to better use. There is also the question of who will fly and maintain the aircraft. Does Angola have pilots trained to fly SU-30Ks? I doubt it. Until Angolan pilots can be trained, will foreign pilots be hired? If so, what is the point? I am more concerned about the rationale for purchasing such aircraft than I am about the condition of these particular planes,” Shinn asked rhetorically.

“In all fairness to Angola, a couple of other African countries have also purchased or plan to purchase SU-30s from Russia. Uganda has taken delivery of six and expressed interest in another six. I would raise the same questions about Uganda's purchase as I did about Angola's and Uganda is not an oil rich country, although oil has been discovered there,” he explained.

Ethiopia purchased SU-27 aircraft during the 1998-2000 Ethiopian-Eritrean war and is now reportedly ready to take delivery of SU-30s. While Ethiopia's standoff continues with Eritrea, which has high-performance Russian MiGs, this is not a wise use of scarce foreign exchange in view of the huge needs in both countries for economic development, Shinn added.

All of these countries are independent and can make their own decisions. Eventually, however, they need to answer to their own people. Goodness knows the United States over the years has gone forward with some ill-advised and very expensive military hardware programs. No country seems to be immune to mistakes in this area, according to the former U.S. top diplomat and academic professor.

In a new research report titled “Angola: Russia and Angola - the Rebirth of a Strategic Partnership?” which was released in October, the authors Ana Christina Alves, Alexandra Arkhangelskaya and Vladimir Shubin acknowledged that “defence remains the most solid Russia-Angola cooperation dimension. To date, Russia is Angola's most strategic military partner.”

Ana Christina Alves, a senior researcher at the Global Powers and Africa Programme, South African Institute of International Affairs (SAIIA), explained to this correspondent that “military equipment is undoubtedly the largest and most profitable side of Russia's trade with Africa – which the figures unfortunately don't feature in official bilateral trade data. If these were included, the bilateral trade volume would appear much more impressive. This is perhaps the strongest dimension of Russia's dealings in Africa at present, but because of the nature of the business very little is known outside military circles, so hard to get the actual picture.”

But for historical reasons, Alves concluded that the provision of military equipment and arms (as well as related services and maintenance) remain a critical dimension of Russia and Angola relations in particular, and will continue generally to be so in the foreseeable future in Russia's relations with Africa.

*Kester Kenn Klomegah is a freelance journalist and an independent researcher on both Russia and China's engagement with Africa. In 2004 and again in 2009 he won the Golden Word Prize for a series of analytical articles on Russia's economic cooperation with African countries.