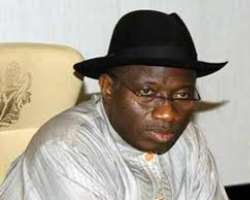 The Secretary to the Federal Government of the Federation, Senator Anyim Pius Anyim,  announced this in Abuja at a dinner in honour of the International Chair of the Extractive Industries Transparency Initiative (EITI), Clare Short.

Senator Anyim said President Jonathan's decision to reconstitute the committee was as result of his administration's decision to fully reintegrate the NEITI mandates into the country's economic policy agenda.

NEITI's Director of Communications, Orji Ogbonnaya Orji, in a statement, said the action wa meant to bolster the team's performance.

He said,  ' in the wisdom of Mr. President, it is necessary to strengthen the Inter Ministerial Task Team with high ranking officers from all key agencies covered by NEITI process who have requisite authority to take decisions on NEITI Audit Reports findings and recommendations and ensure that these recommendations are implemented'.

Others are the Auditor General of the Federation, the Chief Economic Adviser to the President, Permanent Secretary, Federal Ministry of Finance, the Managing Director, Pipeline and Products Marketing Company, and the Managing Director, Niger Delta Development Commission, the Executive Secretary, Petroleum Products Pricing and Regulatory Agency, the Chairman, Nigeria Miners Association, the Director General, Mining Cadastre Office and the Chairman, Oil Producers Trade Section of the Lagos Chamber of Commerce.

President Jonathan is expected to inaugurate the reconstituted team in due course.

Meanwhile, Short, who was on a one -day working visit to Abuja,  described Nigeria's implementation of Extractive Industries Transparency Initiative (EITI) in the Country's oil and gas and mining sectors as exemplary.

She expressed delight on the support and commitment of President Jonathan to carry out reforms in the sector to conform with EITI Principles.

The EITI Chair said she was in Nigeria to exchange views with governments, the civil society and companies on the need for collaboration with NEITI to ensure that revenues from the extractive industries support national development and reduce poverty in the country.

The Chairman of NEITI National Stakeholder Working Group, (NSWG) Ledum Mitee explained that NEITI's sustained intervention in the sector was to enthrone transparency and accountability with a view to ensuring that Nigerians derive maximum benefits from the natural resources in their country.

The Executive Secretary of NEITI, Zainab Ahmed informed the gathering that NEITI had already developed a comprehensive remediation plan with specific details of what needs to be done by each of the relevant government entities.

She expressed the hope that the reconstituted Inter Ministerial Task Team will effectively make use of the plan and cause these remedial issues to be implemented. She highlighted some of the remedial issues to include recovery of funds in the hands of companies as a result of under payments and under assessment of taxes, royalties and rents among others.

She welcomed the emerging partnership between NEITI, Government, Companies, the Civil Society and Legislature in the discharge of NEITI mandate.