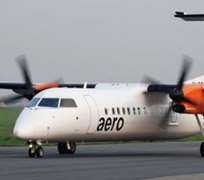 
As the Ministry of Aviation proceeds with plans to set up a national carrier that would operate international, regional and domestic services, it has emerged that Aero Contractors has been designated the nation's flag carrier.

It was gathered that the decision to designate Aero Contractors as the national carrier was supposed to have been announced during the October 1 national broadcast to mark Nigeria's Independence by President Goodluck Jonathan, but it was deferred for another date.

As a national carrier, Aero Contractors is expected to enjoy preferential rights or privileges accorded by the federal government for international operations.

It would hold some lucrative routes in monopoly, negotiate commercial agreements, pools and bilateral agreements with foreign airlines, articulate manpower training for the sector and serve as diplomatic tool for Nigeria.

Designating Aero Contractors as the national carrier would also allow the airline to codeshare with other international airlines, as this would improve Nigeria's ability to take advantage of Bilateral Air Service Agreement (BASA) it has in place with other countries.

Aero Contractors, it was further gathered, was selected for the role because of the 60 per cent stake the Asset Management Corporation of Nigeria (AMCON), a federal government institution, already holds in the airline.

Under the arrangement, the federal government shall retain 60 per cent through AMCON, while Legacy Holdings, a company owned by the Ibru family, will hold 40 per cent in the national carrier.

The source further revealed that AMCON would only hold on to its 60 per cent shares in Aero Contractor for a limited period, after which they will be sold to the public at some future date. Thisday