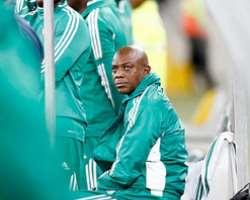 
The Super Eagles Coach plans to fine-tune his ‘B’ team after taking a huge step towards qualifying for the 2014 World Cup as they saw off Ethiopia 2-1 in the first leg of their play-off clash at the weekend.

Nigeria return to action when they travel to London to face the Azzurri next month, and Keshi could be set to name several fresh faces, and a few old ones, in the 28-man squad, with Dynamo Kiev midfielder Haruna a likely candidate for a call-up.

Rueben is also available after overcoming a long-term groin injury, while Hull City striker Aluko has been out of the reckoning for some time, having made his debut under Keshi some two years ago.

“In every department of the Eagles we need competition and we need players who can bring that competition. If Lukman is doing so well, we will bring him in,” Keshi told Premium Times.

“We have people like (Gabriel) Rueben and Sone Aluko, who are doing well too, so why not we will bring all of them in? They are all Nigerians and they want to play and it’s a blessing for me and for the team.”