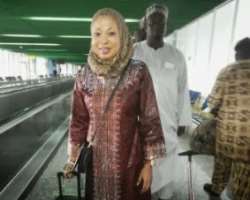 Popular Yoruba actress, Lizzy Anjorin may have 'ported' from Christianity to Islam, if feelers reaching us is anything to go by. The Badagry-born actress reportedly announced that she will now love to be addressed as Aisha from now on.

To confirm her love for her new religion, she visited the Holy land of Mecca, which is a sacred land for Muslims all over the world.

We are yet to ascertain the real motive behind Lizzy's sudden change of religion, but their are speculations that she may have allegedly fallen into the arms of a rich Alhaji, who may have insisted she converts to Islam as a condition for alleged their romance, just like her fellow actress and namesake, Liz Da Silva.