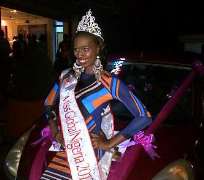 Cervical cancer is a dangerous ailment that is gradually taking the lives of unsuspecting and innocent Nigerians. The awareness of the disease is very low unlike the breast cancer. This is why respected pageant organisers, Miss Global Nigeria (MGN) have taken it upon themselves to raise awareness on the cankerworm with the aim of fighting it to the barest minimum. In this respect, MGN team has joined forces with the Kaduna Polo Club to tackle the problem.

To do this, the pageant organisers, through its Queens, who emerged winners at the 2013 edition of Miss Global Nigeria beauty show held in Lagos in July, have taken the fight to this year's edition of the Fifth Chukker Polo tournament holding in Kaduna from October 16th-26th, 2013.

The MGN Queen, Michelle Ijeh will use her pet project, which is on Cervical Cancer, to raise awareness on the menace. She will be leading the team of Speakers to deliver lecture to international audience and Polo lovers from around the world at the Kaduna event.

Speaking on the partnership, the General Manager of the Fifth Chukker Polo & Country Club, Adams Taylor, ater an intensive meeting with the Miss Global Nigeria team, said with an air of conviction, “I think our organization will like to work with your company after so much deliberations on what the synergy will bring on the table, we're actually amazed at your presentation on Cervical Cancer, yes, we're aware of Breast Cancer but Cervical is new, so it will be our pleasure to partner with your organization on this service to humanity venture.”

X-raying further on the partnership deal between the Kaduna Polo Club, organizers of the forthcoming Fifth Polo tournament and Miss Global Nigeria management, stated that, the Miss Global Queen and her runners-up will take up the campaign for the awareness of Cervical Cancer throughout the duration of the tournament holding in Kaduna from 16th-26th, October amidst international Polo lovers from across the globe with a view to crowning the Polo game with an evening of contemporary Fashion Show/fund raising dinner where the Queen, runners-up and friends will be on catwalk to model breath taking attires from a UK based designer, Sunny Rose Couture. Proceeds from the dinner will go to Miss Global Nigeria pet project.

The Fifth Chukker Polo tournament is an annual Polo game organized by the Kaduna Polo Club with top elites in Nigeria and beyond as players, it is pertinent to note that, international Polo players and enthusiasts are being expected from Dubai, USA, UK and the rest for this year's grand event which kicks off on Wednesday, 16th of October, 2013.

The MGN Queen has been busy with activities since she returned from Dubai for her two weeks' vacation after the beauty contest.