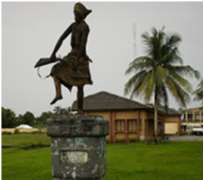 It is no longer news that the Northern and Southern Protectorates were joined together in 1914 to become one political entity now known as Nigeria.

To celebrate the centenary anniversary of this “Union” a number of activities have been lined up by various state governments in the Federation. States like Lagos and Rivers have rolled out series of activities to mark the 100 years of 'marriage'.

My concern today is to draw the attention of all of us, to some important historical facts buried either as a result of oversight or deliberate attempt to erase an integral part of the said history. And this part has to do with Akwa Ibom state.

Here is what I am talking about. Lord Frederick Lugard performed the declaration of the Amalgamation of the Northern and Southern Protectorates of Nigeria in Ikot Abasi Local Government Area of Akwa Ibom state in 1914. In other words the formal signing of the Treaty took place here. He, Lord Lugard was also known to have lived in Ikot Abasi during the early period of the Amalgamation.

Surprisingly, In Ikot Abasi today, the relics of what was the living house of Lord Lugard and the “Amalgamation Building” also located in the same premises have both been forgotten. No serious attention has been paid to what should have been a Monument for Tourists/students of history and the general public.

Again, Ikot Abasi Local Government Area of Akwa Ibom state was called upon to make another history for Nigeria. This same building used for the signing of the Amalgamation Treaty later, also hosted another historical event.

It was here that General Olusegun Obasanjo (the Commanding officer of the Nigerian Army) and General Philip Effiong of the Biafran Army signed the declaration of cease-fire that brought to an end the Nigerian civil war in 1970.

Those are not all. There is yet again another event that took place here. The Women's war of 1929 was also fought in Ikot Abasi. That war resulted in the loss of lives of many of our grandmothers and great grandmothers.

The rioting women led by Madam Udo Udoma, the mother of Sir Udo Udoma, were protesting the imposition of taxes on women by the British colonial government. As a result of the protest, the women were invited for a meeting by the District Officer (D.O). While the meeting was going on inside the office of the D.O, a mere shaking of the gate by the women outside who perhaps thought their leaders had been detained, infuriated the British police officers who instantly opened fire on the unarmed women. Mrs Udo Udoma was murdered along with other women by the British police in a shooting spree that ensued. Some other women trying to escape the police gunshots jumped into the nearby river and got drowned; some of their bodies were never recovered.

Today, it is only Ikot Abasi Local Government that marks this event every December 16.

Akwa Ibom state government pretends not to bother about such land mark occasions that took place here in its domain even when such events are being celebrated elsewhere. We could not as much as raise a symposium or engage “uta” group to draw the attention of Nigerians and particularly Akwa Ibomites who might not have known what role the state played in this history in the not too distant past.

If the above is true that Akwa Ibom state had hosted such important events, and it is, why has the Nigerian government and even Akwa Ibom state government ignored this historical site? How can we not blow our trumpet if others do not want to do so for us?

Can we possibly wave aside this part of Nigeria's history as being inconsequential?

These to me, were monumental events that should be treated as such.

I am by this write up drawing the attention of the Federal Government of Nigeria, Akwa Ibom state government, Nigerian Tourism Development Board and the planners of the centenary anniversary event to include Ikot Abasi Local Government Area of Akwa Ibom state in the programme of events as a matter of due recognition.

Secondly, the Federal government should take the lead in maintaining and sustaining the relics of these houses not only for posterity but also as Tourists sites.

It will not be out of place for the Federal government to site an important project here as a form of recognition.