As Another Plane Crash-lands; 512 Escape Death 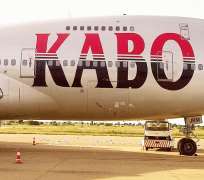 
No fewer than 512 passengers on board Kabo Airlines with registration number 5N-JRM yesterday gathered to thank God when their plane made an emergency landing at the Sir Abubakar III International Airport, Sokoto, following a tyre burst in mid air.

The plane, which was bound for Saudi Arabia, originally planned to stop over in Sokoto where it would convey 48 additional passengers including Kebbi State governor Saidu Usman Dakingari and one of his three wives, according to findings by LEADERSHIP Sunday.

Hamza disclosed that that the more than 400 passengers on board were unhurt, but the Federal Airports Authority of Nigeria (FAAN) said there were 512 pilgrims and crew members in the plane.

One of the passengers, who preferred anonymity, said he was not comfortable from the outset when he noticed that the plane he would board was owned by Kabo Airlines.

Some of the intending pilgrims who were immediately checked into a hotel within the Sokoto metropolis told LEADERSHIP Sunday that they were shocked when they heard a loud bang from within the aircraft.

The passengers said they were told after the incident that the tyre of the aircraft burst.

Commenting on the cause of the emergency landing, the acting airport manager, Madu Bukar, said preliminary investigation revealed that the plane had a burst tyre. A probe would reveal the real cause of the incident, he said.

The plane, which landed with deflated tyres, destroyed the navigational equipment on the runway.

It was learnt that the Boeing departed from the Mallam Aminu Kano International Airport, Kano, en route to Saudi Arabia when it had a stopover at the Sokoto Airport to pick up more pilgrims.

FAAN spokesman Mr Yakubu Dati said, 'Preliminary reports indicate that the control tower gave the pilot clearance to land on Runway 08 but the captain opted to use Runway 26 for reasons yet to be ascertained. The 512 souls on board, made up of 494 passengers and 18 crew members, landed safely. The aircraft however damaged some instruments landing system (ILS) and came to a stop with deflated tyres.'

He said FAAN emergency response apparatus acted swiftly to secure all passengers on board and the aircraft.

The airline has since made arrangements for another aircraft to pick the pilgrims to complete their journey to Saudi Arabia.

Meanwhile, relatives of the victims of last Thursday's crashed Associated Airlines chartered flight who were at the Lagos State University Teaching Hospital (LASUTH) Department of Pathology and Forensic Medicine for DNA test yesterday have asked the hospital management to release the bodies of their relations to them for burial.

The victims' relatives arrived in the mortuary section of the hospital yesterday morning for the DNA test required by LASUTH for the identification of the bodies in sober mood.

The exercise was scheduled to begin at 10am and end at 6pm yesterday and today. For the test, the blood of the children or immediate relations of the victims would be required as sample.

Although there were speculations that the corpses of some of the deceased might be released for burial yesterday, none was released as at press time. The DNA test, according to hospital officials, might take up to a week or longer.

Relations of one of the deceased, Akeem Akintunde, who were at the hospital at 9am yesterday, told the hospital that his body was overdue for burial according to Muslim rites.

Akeem's frail-looking father and visibly distraught mother came for the DNA test but were told to return home as the brother would be enough for the DNA sampling.

The family of Chijioke Duru, another victim of the crash, also insisted that his body should be released to them for burial. They disclosed that he was the first son of the family and would be buried in his country home in Imo State. 'I don't know what to tell his wife.Their marriage was only two years old,' a family member said.

Chijioke's daughter was brought for the DNA sampling accompanied by his sister and other relatives, as his wife was said to be back home with a new baby.

The younger brother to Tunji Okusanya Snr, founder of MIC Undertakers, who came along with other relatives and some members of staff of MIC, did not make any comment.

Ekiti State governor Kayode Fayemi, who was at the hospital to visit the survivors, declined to speak with journalists.

Officials of the National Emergency Management Agency (NEMA) who visited the survivors confirmed that the survivors in LASUTH were in stable condition.

A relative of Femi Akinsanya and in-law to Agagu, Dapo Akinsanya, confirmed that both Feyi Agagu and Femi were in stable condition. 'But the doctors are complaining that they are not resting properly because of the visits and they should not be talking too much. But now they are both sleeping, ' he said.

Farinloye said NEMA responded quickly to the crash site because of the location and the beacon from the aircraft.