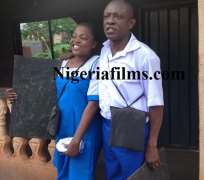 Two Nollywood artistes, Nkem Owoh otherwise known as Osuofia and Funke Akindele have both returned to Enugu location where they are starring in a movie as Secondary School students.

This new flick which had generated unbalanced criticisms to why the both old artistes would be used as school children while there are young acts that would have suited the character, however got melted when the news of Amayo Uzo Philips directing the movie came to ears.

Known for his multifaceted style in movie making, many believe that when the movie comes out that it would be loaded with much surprises to what below location photos entail