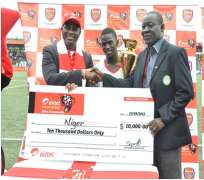 Lagos, Nigeria; September 22, 2013: The Managing Director and Chief Executive Officer of Airtel Nigeria, Mr Segun Ogunsanya has predicted that the Airtel Rising Stars U-17 Championship will in no distant future become the feeder channel for the national teams of African nations where the telecommunication firm operates.

Mr. Ogunsanya made this declaration on Sunday while speaking at the closing ceremony of the Season 2 of the Airtel Rising Stars U-17 Africa Championship hosted by Nigeria.

He said, 'It is a fact that this championship witnessed a high level of excellent soccer display by the participating countries, which clearly confirms our belief that the ARS platform will, sooner than later, become the feeder channel to Africa's national teams and the best football clubs across the world'

The ARS is the only private-sector age-grade soccer competition that offers a unique platform for both male and female youngsters to pursue their dreams across 17 African countries.

He said, 'The beauty of the ARS is that it offers a platform for both male and female youngsters to pursue their dreams. As we all probably know, this is the only private sector grassroots soccer development initiative that brings 17 African countries together for one championship. That makes it a unique experience.'

The CEO thanked Arsenal FC of England for its partnership, saying his company's involvement in grassroot football development in Africa is in line with the vision of building one network and connecting Africa to her passions, in fulfilment of the brand promise of becoming the most loved brand in the daily life Africans.

Meanwhile, Arsenal Legend, Robert Pires has described the ARS Tournament as the hope for budding young African footballers. He also expressed happiness at the opportunity to visit Nigeria for the first time.

The Airtel Rising Stars U-17 Africa Championship season two was hosted by Nigeria in the city of Lagos across four match centres which included Agege Township Stadium, Legacy Pitch, National Institute for Sports Playing Field and the Main bowl of the National Stadium, Surulere.

It began with a gala night on Sunday in honour of the participating countries and tournament officials, followed by an opening ceremony and tournament opening group matches at the Agege Township Stadium, Agege.

Airtel Rising Stars Africa Football Championship, in its second season, is Africa's biggest Under-17 grassroots tournament and the only one with strong consideration for gender equality with the incorporation of the Girls Category.

In the rest of the geographies, it offers 2G, 3G mobile services. Bharti Airtel had over 264 million customers across its operations at the end of July 2012. To know more please visit, www.airtel.com