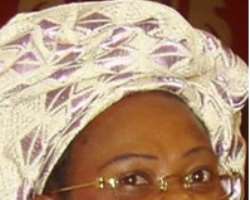 Two weeks ago, Dora Akinyuli a.k.a. “Dora the Explorer” received a loud ovation for challenging the status quo within the Nigerian polity, when she moved a motion for President Yar`dua to transmit a letter to National Assembly and allow Goodluck Jonathan

run the affairs of Nigeria as acting president. But when council meeting convened today, Dora Akinyuli `s colleagues turned against her, as she was seriously reprimanded for her unguarded utterances to the media. .

According to sources within FEC, Dora explored in into troubled waters, when she granted an interview to select media organizations over the weekend, condemning the order of business under ailing President Yar'Adua and lambasted some of her colleagues,( over bearing ministers) close to the ailing President Umaru Yar`dua. “You are the minister of information, thus the countries image maker, what you did is a case of washing our dirty linen in public” a minister was alleged to have told Dora Akinyuli .

Huhuonline.com understands that Dora Akinyuli left the council chambers feeling like an orphan who has been truly rejected and abandoned . Unless her Godfather's intervenes, Dora Akinyuli may have ended her political career, even before it commenced. Consequently, the Dora Akinyuli led G-10 ministers, who had met yesterday at Radio house were unable to carry out their plot of moving for the imposition of section 144 as planned.


In a related development, the six man delegation which was sent to Saudi Arabia to ascertain the health status of President Yar`dua, today turned in its report.

The report reads:
1) Recall that on the 17th of February council constituted a six man cabinet delegation to visit President Umaru Musa Yar'Adua who was hospitalized in Saudi Arabia . They were also to convey the appreciation of the government and the good people of Nigeria to the Saudi Monarch for the care and support given to our President.

3. Preparatory to this visit the acting president had addressed a letter to the Royal Majesty, King Abdullah Bin Abdul-Aziz Al Saud of the Kingdom of Saudi Arabia , introducing the delegation as a special envoy from the presidency. In the letter, the acting president conveyed the profound appreciation and deep gratitude of the government and the entire people of Nigeria to the king, for the kindness, hospitality, fraternal care and excellent facilities extended to President Umaru Musa Yar'Adua.

4. The delegation reported that they departed Nnamdi Azikiwe International Airport , Abuja , early hours of Tuesday, 23rd February 2010, some minutes after midnight. On their arrival in Riyadh , Saudi Arabia , they were received the Nigerian Ambassador, Alhaji Abdullahi Aminchi and the Royal Protocol Personnel and driven straight to the Conference Palace , where they were accommodated.

5. Prior to their arrival, the Nigerian Ambassador has secured appointment for them to be recived by His Highness, Prince Saud Al-Faisal, Saudi Minister of Foreign Affairs at 18.00 hours on the 23rd February, 2010. The Foreign Minister received us on behalf of the Saudi King and re-affirmed the commitment of the Saudi Government to promoting good relationship with Nigeria . He also assured the delegation that the Health of President Yar'Adua was improving. The delegation thanked the Saudi Foreign Minister for the warm reception and the hospitality which the kingdom accorded to them and delivered the Acting President's letter to him, for onward transmission to His Royal Majesty, King Abdullah Bin Abdul-Aziz Al Saud.

6. Thereafter, the Nigerian Ambassador, Alhaji Abdullahi Aminchi informed the delegation that he had received information that President Yar'Adua had been discharged and was on his way back to Abuja . From all indications, the President must have departed Jeddah Airport at about 10 pm, Saudi time on Tuesday 23rd February 2010. With news that the President had left Saudi Arabia for Nigeria , the delegation did not consider it necessary to proceed to Jeddah, where the President was hospitalized. Accordingly, they decided to return to Nigeria .

8. The Acting President was accordingly briefed on their return.


SECRETARY TO THE
GOVERNEMNT OF THE FEDERATION,
Head of Delegation
Abuja
1st March, 2010.