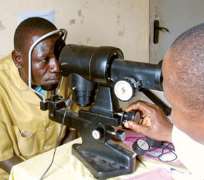 
HOW will you feel if you suddenly discover that the driver of the bus or vehicle you have boarded is blind? In Lagos, it has been discovered that a large percentage of drivers, both private and public are suffering from different degrees of eye defects that have made them to be partially blind.

According to the Lagos State Drivers' Institute LASDRI, which has trained about 65,000 drivers since August 2009, about 22 per cent of the trained drivers or 14,300 were discovered to be partially blind.

The law establishing the institute came into being in 2007 but LASDRI commenced operation on August 25h, 2009, with the sole aim of ensuring improved road safety culture on the roads.

Road safety culture
Mr. Ayodeji Oyedokun, is the Chief Executive Officer CEO, LASDRI, while speaking with Vanguard on the activities of the institution for over four years, stated: 'We are all aware of the fact that there are so many drivers with drivers' license who never had any formal training in driving technology. We are aware of the fact that makes people to rush for driver's license, which is mainly for an identification document.

'What we are saying in essence, is that there are so many people driving out there that are not supposed to owe drivers license because they did not pass through any formal training. This had led to a lot of carnages on the highway, traffic snarl and jam, with resultant effect of gaseous emission into the atmosphere, which ultimately leads to health hazards, and loss of man hours, because they do not know the rules guiding the use of highway.


*A driver under going an eye test
'In the highway transportation system, there are three main factors that interplay; the human being which is the driver, the environment-road and the vehicle, it is the human factor that is key to the severity or fatality of road crashes. Therefore, it is the human being that needs to be worked on in terms of competence, fitness, mental alertness, level of eye sight, because driving is about seeing and being seen, hence, the government decided to set up LASDRI.'

According to LASDRI boss, before the commencement of operation, various researches were carried out where it showed that 75 percent of auto crashes were due to human errors.

•Out of the 65,000 of drivers tested, 22 percent (approximately, 14,300 drivers) were found to be suffering from eye defects, such as myopia and were later referred to ophthalmologists for corrective measure.

•And 99.2 per cent of drivers with eye defects were males, while 1.8 percent were females.

•1.8 per cent of the detected defects were myopic (short sighted) while 12.9 percent were pre-myopic

•3.3 percent long sighted
Relationship with NURTW:
'We are working with, National Union of Road Transport Workers, NURTW, recently, most of the taxi cab drivers in the state came for the training. The yellow bus drivers, popularly called 'Danfo drivers' are recalcitrant but we are getting them batch by batch. Though, all the executive members have been trained. All the Bus Rapid Transit BRT, drivers, Rapid Response Squad RRS, drivers are being sent for training at the centres.'

Advice: 'It is an opportunity for employers of drivers, motorists and the public to learn how safety can be enhanced through training. According to international standard, through training and retraining of drivers, auto accidents due to human error, are expected to be reduced between 35-70 percent.

Drivers are not being given adequate training but employers give them millions worth of vehicles to drive without considering safety of the investment.

Even companies, individuals from outside the states have been coming for training even federal government's drivers have been coming. Drivers should also endeavour to have regular eye check up because in most cases, the capacity of eye depreciates on daily basis because of exposure to different factors.'