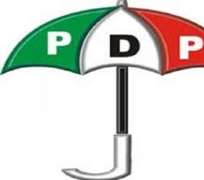 The Bamanga Tukur-led Peoples Democratic Party (PDP) has scaled up moves to take over the PDP structure in Kano State from the state governor, Rabiu Kwankwaso.

This was underscored yesterday by the installing of Alhaji Hassan Kafayos and Andrew Musa as chairman and secretary, respectively of an 11 member interim state executive of kano state PDP.

More so, the national PDP cleared the return of the son of late military head of state and former governorship aspirant of Congress for Progressive Change (CPC) in Kano state, Mohammed Abacha, to the Peoples Democratic Party (PDP).

Recall that the Kano state governor, Rabiu Kwankwaso, alongside, governors of Niger, Adamawa, Jigawa, Rivers, Sokoto and Kwara have since August 31 joined some other members of the PDP to float a new PDP against the Bamanga Tukur led leadership of the party. Both factions have been engaged in reconciliatory talks aided by elders of the party.

However, with the reconciliation talks not making much progress, sources from the PDP told pointblanknews that the next line of action is to ensure that the party structure in those states are taken away from the governors who are leaders of the party in the state.

Meanwhile, addressing the press at the national secretariat of the party, after a close door meeting with the party’s NWC, Abacha admitted he did not consult the governor of the state, Rabiu Musa Kwankaso, over his return to the party even though he recognised him as the leader of the party in the state.

He said “we had wide consultations with the people back home on the major issues that made us leave then and all the issues were cleared that is why we are here.

Abacha who recalled that he left the party in 2010 over lack of internal democracy within the party said “I came to a realization that no other party captures the whole country, tribe and religion like the PDP.

“That is why we have come back to make a formal declaration of our return to the PDP. We were received warmly by the National chairman, we are comfortable we are welcome.

Responding to insinuations that he was out to tackle the state governor, he said “power belongs to God, God gives power. Nobody is here to wrest power from anyone.”

He however assured that all the interest in the party, including those of the Governor Rabiu Kwankwanso would be considered in the composition of the caretaker committee.

Metuh said the party has no intentions of upstaging the governor in the state adding “we have no reason to exclude the governor from the PDP. The fact that he is doing well does means we will not exclude him. Not just in Kano State but in all other states.”

Metuh who noted that Abacha’s return was made possible by the Seriake Dickson led reconciliation committee of the party, added that when Abacha met with Bamanga Tukur, he was told the party was large enough to accommodate him.”

Speaking after the swearing in the chairman and secretary of care taker committee, the national chairman of the PDP, Alhaji Bamanga Tukur, urged the committee to return to the state and ensure they retain the party for PDP.

He admitted that “the opposition in the state has become stronger than before. So make sure that the party is organised and motivated and bring back PDP in 2015.”

On his part, Kafayos said the doors of the state party remain open to all factions of the party in the state.