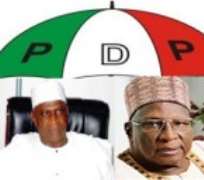 The crisis rocking the ruling Peoples Democratic Party (PDP) finally blew up penultimate weekend when prominent chieftains of the party staged a walkout from the party's mini convention at the Eagles Square, Abuja, to proclaim the formation of a new faction of the party, which they now tout as the authentic PDP.

The Eagle Square convention, which had President Goodluck Jonathan, Vice President Namadi Sambo and virtually all the notable leaders of the PDP in attendance, was called to elect new national officers, following the nullification of the election of several members of the previous executive committee by INEC.

The group then announced the birth of a New PDP and also appointed former PDP scribes Abubakar Kawu Baraje and Olagunsoye Oyinlola as Chairman and Secretary respectively. The emergence of the faction has literally put a knife down the middle of the entire PDP leadership and membership, and also polarized the party's lawmakers in the two chambers of the National Assembly. The split has further intensified the battle for the control of the soul of the party, with no fewer than two law suits already instituted on the matter. Each faction is not only seeking a legal endorsement of its existence, but also an injunction to asphyxiate the operation of the other group.

PDP's journey to this sorry pass is not hard to trace. While many insist that the entire problem revolves around the positioning for the 2015 presidential ticket of the party and the mutual desperation (both on the side of President Goodluck Jonathan to get the ticket, and on the side of his opponents to stop him), everyone seems to be in agreement that internal democracy, which is a desideratum for any political association, has largely been lacking in the PDP.

In most instances, the rules of engagement have been very fuzzy. And, wherever it had taken time to spell out the rules, they have been observed more in default. Even the zoning arrangement for elective offices which the party inadvertently imposed on the polity through the back door, has been breached the most by the same PDP.

The culture of imposition had reigned supreme and might had long been elevated to become right. This had gone on for so long that neither the courts nor even the electoral umpire, the Independent National Electoral Commission (INEC), seemed capable of reining in the party.

In fact, it would be recalled that one of the reasons members of the breakaway group cited for their action was not only that the mini convention of August 31, 2013 was holding in clear violation of both party and electoral laws, many of the delegates to the convention had emerged from processes that stood established laws and norms on their heads.

The group also cited the desperation to hijack the Nigerian Governors Forum (NGF) and the spate of indiscriminate suspension of governors and other perceived opponents of the Presidency by the Bamanga Tukur-led National Executive Committee of the party.

Today, former president, Chief Olusegun Obasanjo, is leading a seven-man reconciliation committee seeking to bring the warring factions back together, even though not much progress appears to have been made so far, with each group digging in. While reconciliation efforts are on, however, both camps have yet to stop making volatile comments capable of throwing the country into an even bigger crisis. Both camps are also busy perfecting fallback options – in anticipation of the eventual collapse of the peace talks. Only last weekend, policemen, ostensibly on the orders of the Presidency, were drafted to seal off the newly acquired headquarters of the new faction.

However, while we recognise the fact that political parties the world over are entitled to occasional internal combustions, PDP must not lose sight of the fact that it is indeed the ruling party in Nigeria and is, as such, answerable to not just its members, but the entire country at large. With as many as 24 of the country's 36 states, it goes without saying that the day-to-day running of no less than three quarters of this country, and the overall destiny of the entire country, depend on how well PDP is able to keep its house in order.

This crisis cannot, therefore, be dismissed as another “family affair”, as the PDP leaders are wont to. The reason is because whatever internal problem the PDP has invariably snowballs into a national crisis. So, while PDP leaders are politicking – even for reasons more personal than altruistic – they must not lose sight of the bigger picture: the implications their actions have on the larger polity that is already overheated.

There is an even bigger lesson in this for the army of opposition parties. Rather than gloat, opposition parties must learn from the PDP experience and look beyond the opportunity to benefit electorally from the weakening of the ruling party. For one, the absence of internal democracy which seems to be fueling the fire of the current problem in PDP, is replicated in virtually all the other parties. It would be better for the others to learn and put their houses in order, than laugh at PDP – for the crisis that took all of 14 years of democracy to come to a head in the PDP might blow just any of the other parties to smithereens in just four years.

Beyond partisan politics, however, the parties to the current crisis must come down from their high horse, deflate a little of their currently overinflated egos and seek an amicable solution to the problem at hand. This is not necessarily for the PDP to survive, but for the sake of the country which can ill afford to have any more tension added to the one already brought about by poverty, hunger, unemployment, general economic downturn and the insurgency of Boko Haram.