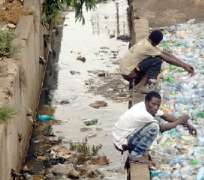 On Thursday 15, November 2012, the Federal Ministry of Water Resources put fears into Nigerians to prepare for a possible outbreak of waterborne diseases. It made the disclosure through the Head of Climate Change Unit in the ministry.

It was in the event of the flood that submerged many parts of the country. Nigerians and indeed members of the international community were worried about the possible outbreak of waterborne epidemics given the poor sanitary situation in and around the camps.

But individuals and organisations did not only ask questions; they also donated materially and financially in making sure that the menace is curbed.

In an account with the News Agency of Nigeria (NAN), the Leadership newspapers of August 8, 2013, in its headline titled, 'EU Donates 14.25m Euros For Water, Sanitation In Nigeria - UNICEF Official', substantiated that the European Union (EU) is one such organisations that continue to help in Water, Sanitation and Hygiene in Nigeria through the United Nations International Children's Emergency Fund (UNICEF).

It's not that Nigeria is not blessed with water resources, but governments at all levels have not taken up the gauntlet to explore the enormous water resources of Nigeria.

In an article published in the European Scientific Journal, August edition with the caption, 'Health Implications Of Water Scarcity In Nigeria,' by Dr Joseph Muta'a Hellandendu, Department of Sociology, Ahmadu Bello University said there was no gainsaying that Nigeria is blessed with abundant water resources, these have largely remained unharnessed.

The journal goes further to say that many diseases prevalent in the country are generally associated with substandard drinking water supply, poor sanitation conditions and inadequate health education programmes.

In its research, "A Study of the National Rural Water Supply and Sanitation Programme Aimed at Achieving Millennium Development Goals in Eradicating Water Borne Diseases in Nigeria," by Olusegun Adegoke Adewusi of Department of Economics, Federal University of Technology, Yola, most under-five mortality in Nigeria results from diseases that are associated with undeserving water supply, inadequate sanitary facilities and unhygienic behaviour.

"The prevalence of diarrhea is higher in the rural than urban areas and in the northern zones than in the south. An estimated 150,000 to 200,000 diarrhea-related deaths occur among children below five each year.

'Onchocerciasis, caused by the black fly is highly endemic in Nigeria, because it's commonly found around quick moving streams of the savannah and forest zones, with 40 million people exposed to the disease. Of this number, 22 million are infected and about 120,000 are estimated to be blind from the disease," writes Adewusi.

It is also estimated that water-borne diseases claim 868,000 children annually, according to a publication in The Tide newspapers of March 22nd, 2013.

In a related development, a re-publication in the Environment and Health of April 16, 2012, but was apparently a courtesy of Daily Trust Newspapers, was with the headline: 'Water scarcity: 64m Nigerians have no access to potable water.'

An organisation called The Water and Sanitation Media Network, an alliance of journalists reporting water and sanitation issues in Nigeria, decried the high rate of infant mortality resulting from water-related bugs in the country, during this year's World Water Day.

A Representative of WaterAid in Nigeria, Michael Ojo, said that 103 million do not have access to sanitation. He disclosed this at a water works and art exhibition for select primary schools in Abuja as part of activities to mark this year's World Water Day.

Ojo purportedly said that only 58 percent of Nigerians have right-of-entry to portable water and only 31 percent have access to sanitation. The Water and Sanitation Media Network was worried that from the figure in The Tide, there is every tendency that Nigeria may not achieve the MDG's water target before 2046 and that of sanitation by 2076.

The group was also worried that Nigeria has not sincerely realised any of the twenty six Water, Sanitation and Hygiene program (WASH) assurances it willingly made in many high level meetings between 2000 and 2012.

These promises were said by the group to have been made at four high level meetings between 2000-2012: the World Water Summit in Johannesburg 2000, United Nations Assembly, New York in 2010, African Sanitation and Hygiene Conference, eThekwini in 2011, and the Sanitation and Water for All meeting in Washington, in 2012; but none of them have been fulfilled so far by the Nigerian government.

'This explains why 35 million Nigerians still defecate in the open, about 90 million are without access to safe drinking water, and 130,000 under five Nigerian children die annually from preventable water borne disease', the group pointed out.

'The problem is particularly acute in the rural Northern Nigeria, where only about 30 percent of the population has access to safe drinking water and adequate sanitation. This situation leads to a high prevalence of waterborne diseases, threatens the livelihoods of smallholder farmers, and contributes to low levels of school enrollment, especially among girls...' said an account.

The story went further, 'USAID is partnering with Women Farmers Advancement Network (WOFAN), a non-governmental organisation through the Access to Water Sanitation and Hygiene program to increase access for poor Nigerians to safe water, sanitation and hygiene education in 46 communities in Bauchi, Kano and Sokoto States.'

In addition, USAID works with these communities to put into practice a hygiene programme, creating Environmental Health Clubs, to teach healthy practices.


'Drinking eight glasses of standard water daily can decrease the risk of colon cancer by 45 per cent, bladder cancer by 50 per cent and it can potentially even reduce the risk of breast cancer... it flushes toxins out of vital organs, carries nutrients to your cells and provides a moist environment for ear, nose and throat tissues,' said Dr. Tunde Obajinmi of Queen of the Rosary Hospital, Lagos.

The authorities must be in coalition with key organisations that are in the forefront of championing the provision of portable water to rural communities like the Global Development Alliance and Coca Cola, the Water and Development Alliance, WADA and the USAID, State Universal Basic Education Boards, WaterAid, Rural Water and Sanitation Agencies and selected local governments; EU and UNICEF, among others.

The government should provide boreholes to communities, water supply and sanitation facilities in schools and clinics and in every public places and kick-off practical policies that will promote hygiene and sanitation practices among the populace.