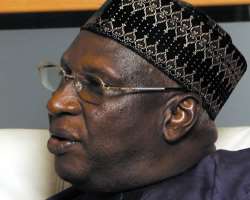 Baraje said Tukur’s PDP failed to comply with Section 222(D) of the Nigerian Constitution, which requires a political party to notify the electoral umpire about an alteration in its constitution.

Section 222 (d) states; ” Any alteration in its (a party’s) registered constitution is also registered in the principal office of the Independent National Electoral Commission within thirty days of the making of such alteration.”

It maintained that Tukur is not a bona fide member of the party having been expelled by its National Executive Committee (NEC) in 2001. Baraje’s faction held that Tukur has yet to be properly re-admitted into the party let alone be its national chairman.

In its statement of claim obtained by Pointblanknews.com, the Baraje faction reminded the High Court of Lagos State that it was the 2009 PDP constitution that midwifed the party’s amended 2012 constitution.

“Evidence has surfaced to prove that strange clauses which were not part of the proposed amended were inserted into the original produced version of the 2012 constitution and those alterations were not approved by the party convention and the National Executive Committee thereby making the document a forged document which is invalid,” the faction told the court.

“The forged 2012 constitution was not equally filled before INEC as required by the constitution, thereby making the PDP constitution upon which the 2013 convention was held an invalid document and the outcome of that convention invalid, as it was held without a valid constitution,” they claimed.

“The proof of these evidence can be seen in the approved memo by the PDP NEC upon which the amendment was done in the 2012 and the original version of the PDP constitution filled with INEC will as well prove these violations.”

Justifying the impropriety of Tukur presiding over the party’s national convention, the faction drew the court’s attention to Tukur’s expulsion in 2001.

“Exactly on the 31 May, 2001,” said the statement, the PDP NEC after its meeting held in Abuja expelled eight members of the PDP in accordance with the PDP constitution which gives the NEC the powers to discipline NEC members who breaches the constitution.”

“Note that Article 10(b) iii of the PDP 2009 constitution and Article 8(17) of the 2012 amended constitution which holds that any member of the party who loses his membership by expulsion can only return to the party with the approval of the party executive at his ward, state and national levels, who shall give him a waiver,” narrated Baraje’s faction.

“Since the expulsion of Bamanga Tukur in 2001, he has not complied with the above requirement of the PDP constitution, meaning that his purported participation at the 2012 convention where he was elected was a fraud and invalid, as he is not yet a member of the party,” they held.

Baraje’s faction prayed the court to void the August 2013 convention of the party on the grounds of illegal delegates in the convention, and the arbitrary disqualification of duly elected delegates by the Screening Subcommittee of the National Convention Committee.

The camp urged the court not to turn a blind eye on of the party’s failure to comply with the provision of Section 85(1) of the Electoral Act which holds that, “a registered political party shall give INEC at least 21 days notice of any convention, congress, conference or meeting convened for the purpose of electing members of its executive committees, and other governing bodies.”

Based on the provision, the Baraje faction held, the PDP NEC ratified the conduct of the 2013 national convention in its meeting of August 22, and the congress running nine days later, on August 31, the party ran foul of the required 21 days notice required to inform INEC about the exercise.

The faction also claimed to have evidence on unelected delegates from the South West Zonal Caretaker Committee participating and voting in the 2013 national convention. This, the group held, contravened Section 85(3) of the 2010 Electoral Act, which states; “the election of members of the executive committee or other governing body of a political party, including the election to fill a vacant position in any of these bodies, shall be conducted in a democratic manner and allowing for all members of the party or duly elected delegates to vote in support of a candidate of their choice.”

They also claimed that the decision of the screening subcommittee to conduct the screening of delegates less than 24 hours before the convention, falls short of democratic conduct as it does not afford disqualified delegates to seek redress.

By dorning vests canvassing votes for Prince Uche Secondus as deputy national chairman of the PDP at the convention ground, the group held that supporters of Secondus violated Article K, Page 8, of the PDP Code of Conduct for Conventions.

The code states; “a party member, aspirant, candidate or agent shall not canvass for votes within the vicinity of the congress venue or party primary convention.”