Nokia to sell phone unit to Microsoft for $7.2b 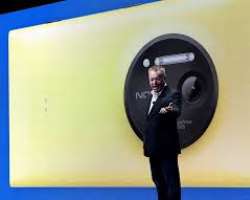 Nokia will grant Microsoft a 10-year non-exclusive licence to its patents and will itself focus on network infrastructure and services, which it called “the best path forward for Nokia and its shareholders.”

The company also announced the immediate departure of chief executive Stephen Elop. He will be replaced in the interim by Risto Siilasmaa, Nokia’s chairman of the board.

Nokia was long the global leader in making mobile phones but has been overtaken by rivals Samsung and Apple as it struggled to establish winning business models and mobile devices.

The transaction announced Tuesday is expected to be completed in the first quarter of 2014, pending approval by Nokia shareholders and regulatory authorities.

Some 32,000 Nokia employees are expected to transfer to Microsoft, including approximately 4,700 people in Finland, the company said.

The operations affected by the transfer generated approximately 14.9 billion euros in 2012, or almost 50 percent of Nokia’s net sales, the company said.

NSN, which is specialised in high-speed mobile broadband, was set up as a joint venture between the two companies in 2007, a partnership that expired in April. The unit has posted stronger earnings than Nokia’s mobile phone business.