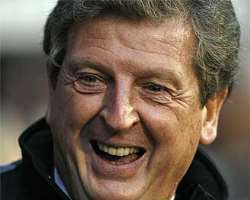 
Roy Hodgson may have found his seat was not befitting of an England manager but no-one appeared more uncomfortable than David Moyes amid the clamour of Anfield.

It was Moyes, not Hodgson, who craved a cushion going into the international break. Instead, his Manchester United team have four points from three games and trail all of those expected to be their title rivals.

Daniel Sturridge saw to that with an early strike for Liverpool which United never really looked capable of overturning.

They were neither dangerous on the break nor especially creative in possession and Moyes blamed this on the absence of Wayne Rooney, out with a head injury. Others will blame it on the absence of Sir Alex Ferguson, unfair as it seems.

On Twitter, #moyesout trended, undoubtedly fuelled by those of an anti-United persuasion but the only trend to concern Moyes is his  long-running issue against the biggest teams.

It was a reputation gained at Everton and which will continue to nag him at Old Trafford after a goalless draw against Chelsea and this defeat at Liverpool.

He has been to Anfield 13 times without a win and perhaps this prompted his outburst about the early fixtures, which he claimed were United's hardest in 20 years.Moyes was determined to stay composed after a painful first defeat as Ferguson's successor and, as Liverpool celebrated their best Premier League start since 1994, he remained upbeat.

'Probably the best we've played this season,' said Moyes. In truth, Liverpool looked a little sharper from the outset and seized the lead from a corner in the fourth minute. Daniel Agger beat Rio Ferdinand to the ball and headed it towards goal, where Sturridge displayed wonderful instinct, drifting off the line to divert the ball into the net with a deft header.

It was a fifth goal in four games this season for a striker who was celebrating his 24th birthday and had been an injury doubt after picking up a thigh injury in the Capital One Cup in midweek.

More impressive still, it was his 16th in 20 games for Liverpool since moving from Chelsea in January. With Luis Suarez banned, he has taken responsibility and grown in stature from the sulking young man unhappy with his Chelsea role.

Sturridge always thought he had more to offer and perhaps he was right. He has certainly struck a fine understanding with Philippe Coutinho and Hodgson will hope the striker is fit for England.

It was a bad day for Hodgson who found he was not mingling with the VIPs at Anfield on a day they produced a stirring tribute to Bill Shankly. He feared this fixture was badly scheduled a day before his squad were due to congregate for the World Cup qualifiers against Moldova and Ukraine - and his prediction was right.

Moyes confirmed Rooney would miss the England games while Phil Jones and Glen Johnson limped out of the squad after picking up ankle injuries. Sturridge is also a doubt.

Johnson's injury in the second half came after a loose pass from England captain Steven Gerrard, which allowed Patrice Evra to steal possession and drive forward.

Jones went off before half time after a tangle with Coutinho which left United players incensed. They felt the Brazilian had nudged the defender slyly as he leapt to win a header. Jones lost his balance and twisted an ankle on landing.

Tom Cleverley took Coutinho out at the expense of a free-kick and a yellow card and the usual animosity washed back into this rivalry.

Moments later, Robin van Persie was booked for a lunge at Agger and the United player was locked in a skirmish with Martin Skrtel, whom he had accused of throwing an elbow.

When Danny Welbeck fell under a nudge from Iago Aspas and saw his penalty appeal ignored, Liverpool players swarmed around Andre Marriner, recommending a yellow card for a dive. Marriner resisted but he did book Ashley Young seconds later for pulling back  Jordan Henderson.

Here was the pattern of the second half, with Liverpool playing on the break as United failed to unlock a tight defensive unit. Rodgers did not allow his full backs to be so adventurous after the break and keeper Simon Mignolet was rarely left exposed.

Gerrard and Lucas Leiva patrolled on the toes of centre halves Agger and Skrtel while Henderson galloped up and down the right wing.

Rodgers drooled about his team's 'togetherness', 'kinship' and 'concentration'. He expects to sign two defenders today. United were restricted to set pieces and shots from the edge of the area. Mignolet kept out a glancing header by Ryan Giggs and denied Nani with a more eye-catching stop. The Liverpool keeper saved low from Cleverley and dashed from his line to confront Van Persie, who sliced wide.

Anfield exploded into noise and Liverpool finished the game on top. David de Gea turned a fierce drive from Raheem Sterling over the bar deep in stoppage time. A splendid save from his goalkeeper will provide little comfort for Moyes.