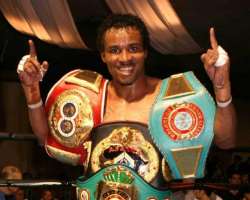 According to report reaching SportsDay, the bout stated with Emenogu charging at Zulfikar from the word go, giving the Fijian no opportunity to throw his hard punches which he is known for.

The bout went through the rounds with Emenogu taking eight out of the twelve with Zulfikar taking four after sustaining a deep cut to his right eyelid through a powerful one two combination from the powerful Nigerian in round three.

Speaking with SportsDay after the fight, the 2003 All-Africa Games gold medalists says "I could tell right away that I was too strong for him, I could see that he didn't like getting hit to the body and that my uppercuts were hurting him.

"Though Zulfikar is strong, but I believe I gave him some doze of my African might," he added.

Commenting on his next title fight billed for March 22 against Yuki Nonic for the Oriental Pacific Boxing Federation title, the new PABA champion says fighting Ali was a good timing as the fight has aided his preparations for Yuki maintaining that Yuki will also be getting some doze of his African might.

Meanwhile, the 2006 Commonwealth bronze medalist says with the spiritual blessings he got from Pastor TB Joshua of the Synagogue Church of All Nations (SCOAN), and his commitment, he is sure to rule the boxing world.