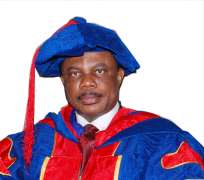 After many anxious months of waiting for the unveiling of the person to take over the mantle of leadership from Mr. Peter Obi on March 17, 2014, Ndi-Anambra and other interest groups in the politics of the state attained an approximate denouement with the results of Anambra 2013 gubernatorial party primary elections of the People's Democratic Party (24 August, 2013) and the All Progressives Grand Alliance, 26 August, 2013. With Dr. Ifeanyi Ubah grabbing the ticket of the Labour Party, and the general conclusion that Dr. Chris Ngige will fly the flag of the newly registered All Progressive Congress, regardless of Chief Godwin Ezemo's loud cry against the impending foul imposition, it is assumed that the shape of the proper gubernatorial contest is formed.

The People's Democratic Party's has however displayed consistent ineptitude in managing the Anambra State chapter. This is predicated on the vaulting ambition of its revolving aspirants to the State House. At the parallel primaries of the PDP in Awka, it produced Dr. Andy Uba's INEC-endorsed candidacy while Dr. Tony Nwoye's candidacy enjoys the recognition of the party's National Executive Council. As Prof Attahiru Jega's INEC and Dr. Bamanga Tukur's NEC measure supremacy on who should play the arbiter, the confounded public looks up to the adjudication of the judiciary on the matter. And to douse the popular speculations of possible complicity in the arbitration, the judiciary is challenged to live up to its esteemed height by providing accelerated and just mediation.

While the uncertainty about the PDP flag bearer lingers, political activities in Anambra are firming up, regardless. Dr Chris Ngige expresses eagerness to resume occupation of the Government House from where he was unceremoniously evicted in March, 2006 consequent upon the historic judgement of the Court of Appeal, Enugu, invalidating his inauguration as governor in 2003. On the other hand is the exuberance that Dr. Ifeanyi Ubah, the candidate of Labour Party, has brought to bear in the pursuit of his gubernatorial ambition. Ubah is believed to have facilitated the influx of non-residents of the state for registration in the Voters' Register update. The discerning public expresses suspicion over such unrestrained largesse to the random-home-goers. Dr. Ubah's much publicized generosity might however be his major mark in the competition.

The All Progressives Grand Alliance, APGA, is the ruling party in Anambra State. Its primary produced Mr. Willie Obiano, a brilliant and highly respected retired banker, as the candidate to fly its flag in the November election. Though Mr. Obiano's emergence ruffled some feathers in the party, the public expects nothing short of a formidable front by the time these discontents are addressed. APGA has proved its capacity to reinvent itself. The party's essence derives from the passionate ownership it enjoys from the people.

Never before, in the history of Anambra State has there been as much sincere concern by as many people over an internal disagreement in a public-interest-group as APGA attracted in its trying times. The All Progressives Grand Alliance to Ndigbo represents a rallying point from where they seek effective reintegration with the rest of Nigeria. The infusion of Igbo spirit into the party was consolidated by its total endorsement by the late Dim Chukwuemeka Odumegwu-Ojukwu, who was literally the totem of Igbo ego. Ojukwu enjoys so much reverence that even in death his influences hold still. In the Igbo cosmology, just as it is applicable in Christendom, the dead is believed to commune with the living. This is alluded to by the frequent recourse to Ojukwu's spirit by the National chairman of APGA, Chief Victor Umeh, particularly in the party's troubled and memorable times. APGA consciousness among Ndi-Anambra is therefore overwhelming.

But more important to APGA's acceptance by the people are the unprecedented achievements of the APGA administration in Anambra State. Governor Peter Obi, provides the litmus with which APGA's claim to being people oriented is tested. But for Mr. Obi's commitment to a comprehensive transformation of the state, which has resulted in improved school system, the best road network nationwide, improved health system, enhanced institutions of government, civilized and effective policing, youth empowerment, care of the indigent aged etc, the story of APGA would have been distasteful. Because of Mr. Obi's success in Anambra, and his achievements as the Chairman of the South-East Governors' Forum, Ndigbo affirm their confidence in APGA as their gateway to good governance. In essence, APGA-consciousness for Ndigbo is like the prevailing Yoruba-spirit in the defunct Action Congress of Nigeria. The Yorubas, however, have stepped up their negotiation for a domineering role in the politics of Nigeria. Their persuasive influence in the affairs of the (APC), their contrivance for stretching their influence to the desert while still courting other parts, is very instructive.

Given the above panoramic scenario of parties and candidates to face the Anambra electorate in November 16 gubernatorial poll, it is evident that there are two or three shades of contenders in the contest. There is the People's Democratic Party which, apart from the poverty of its present outing, has a very sour image among Ndi-Anambra. The PDP carries weighty baggage in the forms of the rudderless government of Dr. Chinwoke Mbadinuju (1999 – 2003), the stigma of Dr. Chris Ngige's electoral fraud and the unprecedented political crises of that era (2003 – 2006), and Dr. Andy Uba's hocus-pocus that afforded him the appellation of 'His Excellency' for an austere seventeen days (2007). On the other hand, the Labour Party can only go as far as Ubah takes it; and that might be some distance from the mark. The Anambra electorate regards the All Progressive Congress, APC, with suspicion, particularly following the party's avid support for the rude 'deportation' of some Igbos from APC's Lagos. Dr. Ngige's defence for that dastardly act might never be acceptable to Ndi-Anambra.

Given its records of good governance, APGA commands overwhelming followership in Anambra State. And for living Governor Obi's conviction for an Anambra North successor, APGA makes a case for equity in the context of Nigeria politics. Its choice of a successful and untainted banker as its flag-bearer in the election is a masterstroke. Other things being equal, Anambra State promises vibrant electioneering; and the electorate, awake to the intrigues among politicians, cannot afford to blow this opportunity of entrenching good governance in the state.