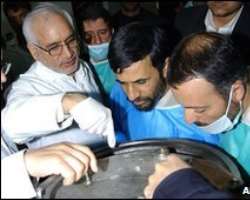 China says diplomacy should be given further time in the dispute over Iran's nuclear programme, as US officials press for new sanctions on Tehran.

China's latest statement came as a senior US diplomat, James Steinberg, arrived in Beijing on the highest level visit since a series of bilateral rows.

On Monday, Moscow signalled it would consider new sanctions against Tehran.

And Iran rejected a UN International Atomic Energy Agency claim it was not co-operating with its investigation.

Dmitry Medvedev
Russian President
“We believe there is still room for diplomatic efforts and the parties concerned should intensify those efforts.”

Speaking in Paris on Monday, Russian President Dmitry Medvedev said he was open to the idea of sanctions – as a last resort.

“Russia is ready, together with our other partners, to consider introducing sanctions” if there is no breakthrough in the negotiations, he told a news conference after talks with French President Nicolas Sarkozy.

Washington and other Western powers want the backing of China – a veto-wielding member of the UN Security Council – for a proposed resolution slapping new sanctions on Tehran.

“We've gone through a bit of a bumpy path here, and I think there's an interest both within the United States and China to get back to business as usual as quickly as possible,” State Department spokesman Philip Crowley told reporters in Washington.

Beijing and Washington are at odds over a Taiwan arms deal, trade matters, internet censorship, and US policy towards Tibet.