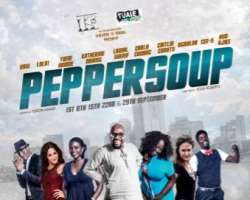 The CoolwazobiaInfo family is set to wow! their fans and listeners as TUEBI ABIDDE aka TUALE of 95.1wazobiafm, bring together : YAW,LOLO1, KATHERINE OBIANG, OGBOLOR, LAWAL SHERIF aka Skeals to star in a comedy stage play titled “PEPPER SOUP” written by ELECHI AMADI and Directed by SOLA ROBERTS.

This exciting production is produced by PLAYFACTORY & TUALENAIJA MEDIA and Scheduled to hold at TERRA KULTURE, tiamiyu salavage, Victoria Island, Lagos and would run for all the Sundays in September, 2013.

Also featuring in this hilarious comedy stage play are two fantastic foreign actresses, CARLA CHIDIAC & CAITLIN CONATY (American) and one of Nigeria promising comedian CEE-Y. The producers have also promised that ALIBABA, MC ABBEY & GBENGA ADEYINKA would be special guest on the show.

Tuebi Abidde popularly known as TUALE of 95.1wazobiafm says “ as a trained and seasoned actor, I am very excited to return back to the stage acting alongside STEVE ONU aka YAW and having the opportunity to work with the Director, SOLA ROBERTS.