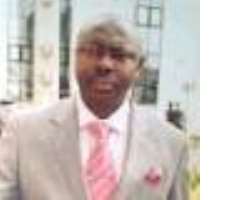 Mr. Dennis Otiotio Is One Of The Persons Mentioned In Connection With Gunrunning In Agrisaba Community In Bayelsa State
Listen to article

In flagrant disrespect to the newly elected King of Agrisaba King Walter M.S. Obanema of Agrisaba Agiri VIII, the duo connived with some Chief loyal to them to procure a huge cache of weaponry and dumped them in a the bush. A young man named INGONAMONDI CANUS discovered the place where the weaponry were kept while hunting for snail.

INGONAMONDI CANUS confided in the former Regent of what he discovered in the bush. In an apparent move to keep his mouth shut, CHIEF DOUGLAS AWUDULU AND BARR. DENIS OTIOTIO held a meeting with him and promised to pay him money. One Reverend Ipigansi who spoke with this correspondent revealed that CHIEF DOUGLAS AWUDULU AND BARR. DENIS OTIOTIO have no good intentions towards the welfare of the people of the Community. They are bent on rendering the Community ungovernable to create the impression that the newly installed King is incapable of keeping the peace.

In the night of Wednesday the same CHIEF DOUGLAS AWUDULU AND BARR. DENIS OTIOTIO sent gunmen, yet to be identified, invaded the Agrisaba Community ransacked some housed and shot three persons in the leg. Those shot include: BRIGHT ETUERE, ALATARI OWUPELE AND ONE OTHER PERSON.

The ploy of CHIEF DOUGLAS AWUDULU AND MR. DENIS OTIOTIO is to petition the Police that it is the new king who kept the weaponry in the bush. But further interrogations showed that the boy the boy who saw the arms and ammunitions and was promised money has gone to Nembe Police Station to testify against them. As we eagerly await details of the Report, it is no secret that both CHIEF DOUGLAS AWUDULU AND BARR.

DENIS OTIOTIO have been eying the coveted position of Kingship of Agrisaba because of the crude oil in the Community. For that reason, they have been terrorizing the elders Chiefs and youths of the Community with the JTF, Operation Famou Tangbei and the gun boats meant for official purposes.

It will be recalled that CHIEF DOUGLAS AWUDULU AND BARR. DENIS OTIOTIO spearheaded a group of Chiefs to take King Walter M.S. the Obanema to Court on the same kingship matter.

As at the time of filing this report two of the accomplices of Chief Awudulu and Mr. Dennis Otiotio have been apprehended while the man in charge of their armoury is on the run. Meanwhile, there is now a manhunt for the escaped armourer.

Prior to this time, when Dennis Otiotio was Special Adviser to the former Governor Timipre Sylva, he stashed away billion of hard currency to buy exotic property at home and abroad. A GROUP OF CONCERNED BAYELSA YOUTHS wondered why the Economic and Financial Crimes Commission has not apprehended the said Dennis Otiotio as one of the characters who wrecked the Sylva administration.

Details are still sketchy if the duo has turned themselves over to the Police for interrogation. Investigations further revealed that Dennis Otiotio has plan B namely to run to Tusla in the United States when he just took an LLM Degree. If he runs out of the Country, it may be difficult to get him apprehended.