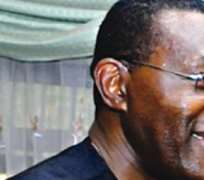 
The National Working Committee of the Peoples Democratic Party has suspended Senator Andy Uba, his brother Chris, and three others from the party.

The five men were accused of conducting a parallel state congress for the nomination of governorship candidate in Anambra State on Saturday.

Others suspended along with Ubas are Ejike Oguebego, Chief Benji Udeozor and  Mrs. Tonia Nwankwu.

A letter of suspension signed by the acting National Secretary of the party, Dr. Charles Akintoye, . announcing the suspension of the Uba brothers and others had been sent to the affected party chiefs

The acting secretary was  directed to write them on their current status having snubbed the NWC which invited them to explain the role they played at the parallel congress.

The letter, dated August 29, read in part,  'The NWC at its 353rd meeting held on Wednesday,  28th August,  2013 reviewed the happenings in Anambra PDP regarding the Anambra Primary election.

'It was noted that you organised a parallel state congress which was unauthorised by the party contrary to section 58 (1) a, b, c, f, h and j of the PDP constitution (2012 as amended).

'As a result of this, you were invited to meet with the NWC on Wednesday 28, August,  2013 for fair hearing,  but you did not appear.

'In view of the seriousness of the issues involved,  you are hereby suspended from the party and the case referred to the appropriate Disciplinary Committee for further necessary action.'

Reacting to the suspension, Chris Uba, expressed surprise at his suspension, adding that there was no reason for the action taken by the PDP.

He said, 'I was surprised to hear that I have been suspended. I want us to respect democracy and the rule of law. We must protect the rule of law and the judiciary.

'Why the rush in suspending me and the five others? There were more than a million PDP members at the congress. They should have suspended all of us.'

Also, Andy said he had not been served with the suspension from the party and because of that, he would not react to it.

Meanwhile, the Inspector-General of Police, Mohammed Abubakar, has assured participants at the National Convention of the PDP and FCT residents  that the police would provide water-tight security during the party's convention taking place  on Saturday at the Eagle Square, Abuja.

Consequently, the IG had issued an Operational Order directing the FCT Commissioner of Police, FCT, Femi Ogunbayode, to ensure a tactical and well coordinated deployment of personnel and other operational equipment in order to provide a safe and conducive atmosphere for the convention.