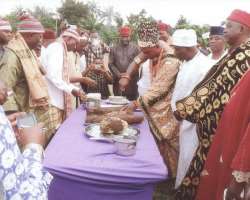 It was a day heralded with pomp and pageantry when the entire people of Umuezie autonomous community in Aboh Mbaise, Imo state recently marked their annual Iri-Ji festival, which was as a way of ushering in a new beginning of harvest period.

In a well-attended ceremony, the event which never left anyone in doubt over if it was actually a festival held at an open field, right inside the community and it elaborately contained all, both children, men and women as they all rolled out their drums in celebration.

Speaking, the traditional ruler of the community, His Royal Highness Eze Charles Ndubuisi Iroegbu described the event as one too unique in the sense that it is once more ushering in a new era of oneness, peace and progress for his people.

Furthermore, the monarch stressed that one of the significances of the august get-together is that it creates a forum for them to come together as a people and rub minds on how to reposition and move the community forward in the area of unity and general development.

Religiously balancing the annual cultural ceremony, the priest in-charge of St. Anne's Catholic Parish in Umuezie autonomous community, Rev Fr. Law Opara commended them for involving God in the planning of the annual event, as he thanked the people for maintaining oneness, which he said played a role in their undisputable decision to choose a monarch for their community, “it never gave room for brouhaha or disarray”.

Promising them more goodies from the on-going Federal government programmes, the Chairman of Imo Sure-P and chairman of the occasion, Nze Doncee Njoku assured them that maintenance of the observed peace and unity in the community would make them first to be considered in the distribution of developmental amenities and empowerment.

Commending them for the promotion of Igbo cultural value through the event, the Sole Administrator of Aboh Mbaise Local government area, Hon. Anthony Atudume said it's in line with the Imo state government's aim to reposition all traditional institutions in the State.

He further urged them not to relent in the promotion of the Iri-Ji festival, adding that such cultural means will encourage national unity and peaceful co-existence.