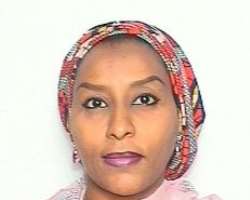 It may be surprising why this article is titled; WHO IS AFRAID OF HON.KA'AMUNA IBRAHIM KHADI. We the above named group has decided to respond to what we considered a blackmail and image tarnishing against the person of Hon. Ka'amuna Ibrahim Khadi, who has done measurably well in just two years in office as member representing Jere Federal Constituency of Borno State.

Following a story entitled: Hon Kaamuna Khadi - A Profile Of Reps Head Girl Of The Absentees & Benchwarmers Club which was published by an online news website, http://legisreportsng.com and was later culled from Legisreportsng.com by another online news blog, www.universalreporters247.blogspot.com.

We decided to set the records straight, after fact finding mission by this body, we have seen and known those that are behind this article, as we are really aware that it was sponsored by some unscrupulous politicians from Jere Federal Constituency who are afraid of the unwavering popularity and antecedents of Hon. Khadi, the only female House of Representatives Member from Borno State barely two years in office.

Her intimidating achievements to the people of her constituency, we gathered after a thorough and careful investigation was also another reason for this smear campaign using the media knowing well that come 2015, they will be trounced again at the polls, just as she did in 2015, when we gave her our mandate to go and represent us after we have been failed by many of the male politicians who were there before.

However, we want to assure Hon. Khadi that we are solidly behind her, not because we choose to but because of her achievements and how she has responded to the myriads of issues confronting the people of Jere Constituency prior before her election as the Honourable Member representing Jere Constituency of Borno State.

In trying to castigate the Hon. Member and satisfy his/her pay masters, the writer of the story made a big blunder when he said Hon. Khadi is merely seen in the House sittings and even she has penchant ostentatious Jewelleries and high-end fashion apparels as there is no truth in all these. We believe the writer of the story don't know the said Honourable and has not find time to know the truth before carrying out his publication, however, all we can say is that all these things put up by the writer, is the writer's own fabrication in order to satisfy his/her pay masters.

Let us put it straight to the writer that, Hon. Khadi achievements within the space of two years in office has surpassed those that represented Jere Federal Constituency of Borno state in the House of Representatives.

Looking at her records and achievements, Hon.Ka'amuna in 2012 thrilled her constituents in Jere Local Government Area when she doled out 22 cars to be used by the beneficiaries for commercial purposes. Aside that she also distributed other poverty reduction materials worth millions of naira to her constituents.

Since then Hon. Khadi never stopped there, as she has constructed and renovated over 100 boreholes, in all the wards that made up her constituency.

Some of the boreholes were motorized boreholes; some were hand pump depending on the topography of the area.

Aside the sighting of bore holes, virtually all the schools in the constituency has benefited from her provision of desks distributed to each of the schools; all these are in a bid to salvage the educational situation in the Constituency.

Through the help of Hon. Khadi, many of the unemployed graduates has gained employment, all these are done within just two years in office of this amiable lawmaker.

We are all aware that mischief makers are out to tarnish and smear the name of our dependable Hon. Member

In the last line, we wish to advise newsmen to always find facts before publishing their stories and for the unscrupulous politicians in Jere Federal Constituency of Borno State, we wish to state it here clearly that what Hon. Ka'amuna Ibrahim Khadi will always have our mandate, as we are solidly behind us having show that there is better days ahead for the people of Jere Federal Constituency of Borno state.

Their campaign of calumny in the media against the person of Hon. Khadi will not hold waters.