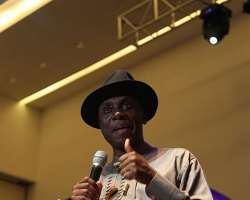 The recent unguarded statements credited to the controversial Chairman of the PDP in Rivers State, Felix Obuah where he exposed the secret behind the campaign by the junior Minister of State for Education, Barr. Ezebunwo Nyeso Wike against the Governor of Rivers State, Chibuike Amaechi may have jolted the powers that be in Aso Rock who are threatening to wiithdraw their support for the Minister whose penchant for violent criticism has drawn the ire of many stakeholders in the Nigerian question.

Our source who pleaded anonymity confirmed to Agogo News that as soon as reports of the statement by Obuah who had told supporters and members of a faction of the PDP under the auspices of the GDI, a political organization set up by Wike to propagate his ambition of becoming Amaechi's successor that Wike os the next governor of Rivers state; reached the Presidency, the First Lady was said to have been jolted and visibly angry as that is not her calculation for 2015 in her home state, Rivers which is divided into Upland and Riverine with her native Okrika belonging to the Riverine.

Informed sources say the First Lady. Dame Patience Jonathan is favorably disposed towards having a successor to Amaechi from the Riverine area particularly from Okrika. The First Lady who no doubts has a stake in the power game of the oil-rich Rivers State is said to have expressed her disdain over Wike's plot to use her name in other to feather his nest and perceived ambition.

Our checks revealed that the First Lady and Wike may soon be on a collision path over the plot by Wike who is from the same ethnic group and Rivers East Senatorial zone with the present governor. Wike and Amaechi are both from Ikwerre ethnic nationality and by 2015, they would have occupied the seat of power for eight years.

It would be recalled that sequel to the 2007 elections while Amaechi and his cousin Celestine Omehia battled over who was the rightful candidate of the PDP and eventual winner of the elections the Kalabaris led by Alabo Tonye Graham Douglas had kicked against the plan to install a governor from the upland area as the then governor. Peter Odili is from Ndoni in Ogba/Egbema/Ndoni L.G.A., an upland region of the state. They claimed it was the turn of the Riverine people to produce the governor but that position was countered by the Ogbakor Ikwerre, a socio-cultural organization of the Ikwerre people who argued that the rotation of the governorship should be amongst the three senatorial zones first before considerations by the ethnic groups.

With the emergence of Amaechi as governor from Ikwerre extraction and Rivers East Senatorial zone, it is expedient that his successor would emerge from another senatorial zone or ethnic group. But that arrangement seems to have been destroyed with Wike's renewed plot to divide the Ikwerres into North and South, a situation which portends danger to the unity and peace of the Ikwerre people.

More so, the First Lady may prefer the choice of a governor from the Ijaw area of the state particularly Okrika which had only produced a governor during the truncated 18 month-tenure of Rufus Ada George. Sources close to her say she is determined to ensure that the imbalance is redressed, as such, she is leaving no stone untouched in this regard. The sinister motive of Wike which has also drawn the ire of the MOSOP as well as other ethnic groups and Ijaw leaders may cause a rumbling amongst the ethnic groups and the GDI which he is the leader.

Since the expose by Obuah during the launch of GDI at Ahaoada East, the once rested issue of Riverine/ Upland dichotomy has become a mantra and is threatening the peace which the state has enjoyed since the coming of Amaechi as governor.

Reports reaching our news desk also has it that some Ijaw leaders who are behind the clamour for the unity of the Ijaws led by Chief Edwin Clark have also dismissed Wike's ambition as one that would not fly. Clark was quoted by an insider to have said that he would speak at the appropriate time. He said," even if we do not support Amaechi, Wike is not the chosen one to succeed him. His plan to foist himself on Rivers people is politically and morally impossible and at the rifht time, I will speak", he said.

Our source who also pleaded anonymity revealed that the plan is for Wike to be used now by those who want to stop Amaechi at all cost and thereafter abandon him.

Wike who was a close ally of Gov. Amaechi is considered as the one who knows Amaechi's weakness and secrets and as such would be instrumental in the plot to stop his perceived ambition to occupy Aso Rock.

He confirmed speculations that he may left his ministerial assignment and has been drafted by the Presidency to prosecute the political war against Amaechi in the state all in a bid to weaken the governor's growing political influence at the centre. The junior Minister also told reporters recently in Port Harcourt that the President, Goodluck Jonathan is aware of his political activities in the state confirming media reports that he is backed by powerful forces to "make sure that the state is ungovernable for Amaechi and to ensure that those in power sleep with their one eye open".

Meanwhile, unconfirmed reports say the favored successor to Amaechi is Senator George Sekibo, a kinsman of Mrs Jonathan. It may yet be another epic battle between Wike and Sekibo. It would be recalled that Sekibo was anointed by the First Lady in 2011 to occupy the Rivers East Senatorial seat but was fiercely resisted by Wike who had the ambition of going to the Senate but was prevailed by Amaechi to step down and allow the First Lady have the concession.

Amaechi was said to have told his former Chief of Staff to allow for a proper zoning arrangement as it would amount to injustice for the Ikwerres to occupy the governorship position as well as the Senatorial seat at the same time, thereby denying the Riverines of that position. That position did not go down well with Wike who believed that Amaechi may have conceded to the First Lady only in a bid to deny him( Wike) the position since the governor may have Senatorial ambition in 2015.

Observers are watching how both Amaechi and Wike will extricate themselves albeit their Ikwerre people from the political web of the Ijaws backed by the nation's First Lady.