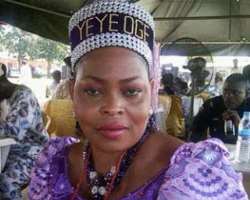 Popular Yoruba actress, Toyin Adegbola well known as Toyin Asewo To Re Mecca, has been blessed with a political appointment in Osun State by the state governor, Rauf Aregbesola.

The actress was made a member of the board of Osun State Arts and Culture Council.

It was gathered that her appointment was announced to her by the Secretary to the Osun State Government. She has now joined her other colleague, Ifayemi Elebuibon, who is the Vice Chairman of the same board.

How To Differentiate Nollywood (Nigerian Movies) From Hollywood Movies

EXPOSED! Pastors Fight Dirty Over Money In Christ Embassy (A MUST READ)