A new partnership brings in troops and dollars
By Masimba Tafirenyika 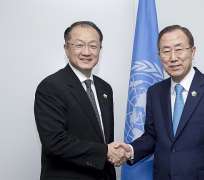 As the United Nations intervention brigade takes up positions to confront armed rebels in the eastern part of the Democratic Republic of the Congo, expectations are high among some Congolese that perhaps this time the troops will get the job done, help bring peace and stability to the region and set the stage for economic revival. This optimism is nevertheless tempered with caution: the country has often seen short episodes of peace quickly followed by intense fighting.

Alarmed by the degree of violence committed by armed groups in eastern DRC, the UN Security Council in March approved the deployment of a 3,000-strong intervention brigade. The decision was a departure from past practice. Whereas the mandate of the current UN mission in the DRC (MONUSCO) is to use all necessary measures to protect civilians, the Council armed the intervention brigade with a stronger mandate authorising it to 'carry out targeted offensive operations, either on its own or jointly with [DRC government forces].' It didn't stop there. It approved the tools that empower the brigade to operate in 'a robust, highly mobile and versatile manner' using infantry, artillery, special forces and reconnaissance teams drawn from South Africa, Tanzania and Malawi.

The Council also gave the UN's first-ever offensive combat force an initial period of one year to neutralize internal rebellion, but was flexible enough to allow for extensionswhile also providing a clear exit strategybased on the troops' performance. Operations started in June against the notorious March 23 movement (M23) rebels and other internal and foreign armed groups that have caused mayhem in eastern DRC for more than a decade.

To attract global attention to the conflict in the Great Lakes region and to lend political, diplomatic and economic support to the international community's latest regional peace initiative, UN Secretary-General Ban Ki-moon teamed up with World Bank president Jim Yong Kim in a historic trip to the DRC, Rwanda and Uganda. Their visit was also meant to showcase the unique partnership between the two organizations, which is part of a new strategy to resolve conflicts and boost economic development in the region.

To drive the point home, Mr. Ban told reporters in the eastern city of Goma, the second-largest city in the DRC, that his 'peace' and 'development' mission with the World Bank chief was 'unprecedented in the history' of the two institutions.

Makhtar Diop, a former Senegalese economy and finance minister and the current World Bank vice-president for the Africa region, concurs. On his blog, Mr. Diop gave two reasons why he thought the visit was important. First, he said, it underscores 'a new era of global institutions working together to promote stability.' And second, 'it signals to the citizens of fragile and conflict-affected nations our commitment: we will not leave you behind.'

Bring troops and dollars
The deadly conflict in the DRC, whose vast size covers an area about the size of western Europe, has long defied solution. For decades the country's litany of woes has confounded observers, caused untold suffering and death for millions of its citizens, and destroyed its infrastructure. The UN's current two-pronged approach, and this time in partnership with the World Bank, is to go for a show of strength reinforced by a set of economic inducements to peace.

The international brigadethe muscular element, dubbed the 'peace enforcer'will use weapons and equipment that include attack helicopters to mount offensive operations and unmanned aerial vehicles, or drones, to gather intelligence. The economic incentive to complement the brigade comes in the form of a $1 billion pledge from the World Bank. The money will be used to build, repair and overhaul hydroelectric-power plants, roads and agricultural infrastructure along the DRC's eastern border with Rwanda and Uganda.

'This funding will help revitalize economic development, create jobs, and improve the lives of people who have suffered for far too long,' said Mr. Kim, adding, 'Now the leaders of the Great Lakes region, by restarting economic activity and improving livelihoods in border areas, can boost confidence, build economies, and give new opportunities for millions of people.'

'In its simplest form,' observed The Economist, a UK-based business weekly, 'their [Messrs. Ban and Kim] idea is get the World Bank to use its financial muscle to back the UN's political agenda.' According to the magazine, Mr. Kim quipped to Mr. Ban, 'You bring the troops and we'll bring the dollars.'

'A peace deal must deliver a peace dividend: health, education, jobs, opportunity,' the UN Secretary-General said after the two leaders met with President Joseph Kabila of Congo in Kinshasa. Touched by the crowds that greeted the entourage during a visit to Goma, Mr. Ban urged the world to invest in the people who have suffered so much and for so long.

Peace guarantors
The joint visit kicked off in the DRC, where Mr. Ban and Mr. Kim held discussions with President Kabila. They then flew to neighbouring Rwanda for talks with President Paul Kagame before meeting with Ugandan President Yoweri Museveni.

At the heart of the visit was an accord called the Framework for Peace, Security and Cooperation, signed by 11 African heads of state on 24 February in Addis Ababa, Ethiopia. The most important aspect of the framework is that the countries of the Great Lakes region agreed not to interfere in each others' internal affairs by, among other things, not providing assistance or support of any kind to armed groups operating in the region.

To make it credible, the accord needed peace guarantors. And the guarantors included the UN Secretary-General, the African Union commissioner, President Armando Guebuza of Mozambique as chair of the Southern African Development Community, and President Museveni in his capacity as chairman of the International Conference on the Great Lakes Region.

The framework is not simply about security, Mr. Ban was quick to emphasize. It is also crafted to lay the groundwork for a political dialogue that is expected to create the conditions for peace and economic development in the DRC and the region.

There are some concerns that the intervention brigade's offensive operations might provoke retaliatory attacks by the M23 and other rebels against soft targets, particularly civilians. A consortium of international nongovernmental organizations with operations in the DRC wrote to Mr. Ban urging him to make protection of civilians a priority for the brigade.

Talking to reporters after the meeting with President Museveni, Mr. Ban made it clear that the 'brigade cannot and does not and will not substitute the primary responsibility of the DRC government' to maintain and preserve its territorial integrity. 'Therefore the primary responsibility is with the DRC government, and within those parameters, we will do our best,' he said.

Echoing Mr. Ban's pledge to do his best to bring peace to the DRC, Mr. Diop, the World Bank's vice-president, made a similar undertaking: 'We simply cannot achieve our goal to end extreme poverty and boost prosperity within a generation unless we help people in the world's fragile and conflict-affected states. They are the ones who need us the most.' These statements, if backed by action on the ground, will likely give Congolese justification for their cautious optimism.