UNN And Howard University To Collaborate In Pharmacy, Medicine, Nursing And Law 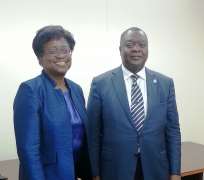 *Exchange Of Faculty And Students

Historic black higher institution Howard University of America is to collaborate with the University of Nigeria Nsukka through faculty and student exchanges in key disciplines of pharmacy, medicine, nursing, dentistry and law.

The collaborations, as solicited by the UNN Vice-Chancellor, would include staff and student exchanges, joint workshops and conferences, shared curricula and joint grant applications. Both parties are working on the memorandum of understanding covering the agreement.

Howard University is a federally chartered, private, coeducational, non-sectarian, historically black university. Founded in 1867, Howard University is one of only 48 U.S. private, Doctoral/Research-Extensive universities, comprising 12 schools and colleges with 10,500 students enjoying academic pursuits in more than 120 areas of study leading to undergraduate, graduate, and professional degrees. The University continues to attract the nation's top students and produces more on-campus African-American Ph.D.s than any other university in the world. Since 1998, the University has produced a Rhodes Scholar, a Truman Scholar, six Fulbright Scholars and nine Pickering Fellows.

University of Nigeria is the first full-fledged university in Nigeria, founded in Nigeria's independence year 1960. The 53-year old institution runs diverse programmes in arts and sciences featuring 15 faculties, 105 departments and seven directorates charged with special projects. It has a student body of 40, 000 in four campuses of Nsukka, Enugu, Ituku Ozalla and Aba.


The main campus in Nsukka houses programmes in agriculture, basic and biological sciences, engineering, arts and social sciences while the Enugu campus houses professional courses in management, architecture, law and environmental sciences. The College of Medicine, with a teaching and referral hospital, is located at Ituku-Ozalla, on the outskirts of the Enugu state capital, while the School of Languages is located at Aba, in Abia State.

The collaboration with Howard University is in line with a programme by University Management under Okolo's leadership to pursue institutional advancement and revive the original vision of building a global centre of learning in Nsukka. UNN has entered collaborations with no fewer than 40 institutions across four continents since 2009.