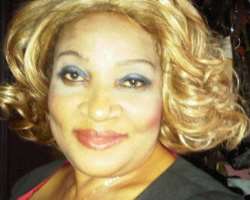 Gradually, veterans in the movie industry in Nigeria are now being celebrated in their lifetime as against the former practise of rolling out drums when they have passed on. If not for God and the quick intervention of the Lagos State government and some well meaning Nigerians, Ngozu Nwosu, who is a veteran in Nollywood, would have died because of insufficient fund to pay for her medical treatment abroad when she was down with kidney and heart related diseases in 2012.

In February 2013, she travelled to the United Kingdom for the treatments and returned hale and hearty in March and has since hit the movie locations to do what gave her fame.

She recently turned 50 and to celebrate her life at 50, one of Nollywood's biggest stakeholders, Best of Nollywood Ventures, organisers of BON Awards, is throwing a three-in-one birthday bash in her honour.

The day one will hold on Wednesday, August 21, 2013 with a lecture titled 'Keeping the Nollywood Veterans Alive', which will be delivered by lecture Dr Okewale of St Ives Hospital, Lagos, by 9am at the Eagles Park, Obokun Close, Ikeja. The keynote address will be given by Ibinabo Fiberesinma.

The day two will be an 'Owambe' with Dele Taiwo and Adetoun (Project Fame). The party will kick start by 5pm on Friday, August 23, 2013, at Troy Lounge, Ogba, Lagos.

The day three is a 'Let's Go Old School' party slated for Sunday, August 25, 2013 at Prince of Anthony, in Anthony Village, Lagos by 5pm.