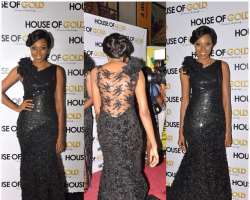 Reports from cinemas screening the popular Ghanaian comedy movie 'House of Gold' confirm that patronage of the movie has been on an overwhelming upsurge since it started showing last month in Lagos.

Managers of Silverbird Nigeria say 'House of Gold' has fast become the most sought out African movie across 11 cinema branches in Nigeria.

In the fifth week of screening, this surpasses a similar milestone reached by multi-award winning movie Single and Married, and however serves as an indication that Ghanaian movies still have a lot more to offer in the upsurge of the African Movie Industry.

Being the third production of executive outfit Media Gh and popular actress Yvonne Nelson, the movie debuted in Ghana on 12th April 2013 and has since been applauded with remarkable reviews by top African critics as one of the best comedy films in 2013.

Centered on deception, lies and a whole lot of drama, House of Gold is a very promising movie that emphasizes togetherness as a family.
Here's a quick recap of the movie. Dab Ansah Williams is a top entrepreneur/business mogul, and polygamist who battles with cancer and has 6 weeks left to live according to medical practitioners.

He decides to call all his children back home for a week, and his long time associate and lawyer helps him accomplish this. Most of these kids are a result of his extra marital affairs, hence born out of wedlock.

This homecoming pans out to be a little more than everyone expected, as everyone is in for some type of surprise or the other whilst, having his/her agenda.