Draws For Match Fixtures To Hold On Thursday
By Uche Peter 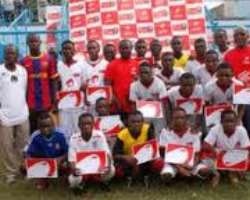 Lagos, Nigeria; August 19, 2013: The race to be crowned national champion and win the nod to represent Nigeria at the Inter-country leg of the on-going annual Airtel Rising Stars national U-17 Tournament will become tighter this weekend when the national championship gets underway in Lagos

192 players comprising 12 male and female teams drawn from six zones across the nation will attempt to beat one another to the crowns and the tickets to participate in the week-long African Championship.

The teams qualified for the three-day championship after featuring in the zonal championship phase where they had to see off strong competition for the national finals tickets from other equally good teams in their zones. They include Kaduna, Abuja, Enugu, Port Harcourt, Ibadan and Lagos, all of which will be featuring both in the male and female categories.

Meanwhile, the draws for the match fixtures has been slated to hold before the commencement of the National Championship. Top management executives from Tournament organizer, Airtel Nigeria, National and Lagos State chapter officials of the Youths Sports Federation of Nigeria (YSFON) and the Nigerian Referees Association, the sports media and some outstanding sports personalities are expected to grace the occasion.

Speaking on the National Championship, Director of Corporate Communication and CSR, Airtel Nigeria, Emeka Oparah assured on the capability of the ARS to live to its billing as the best platform for talent discovery and journey to stardom just as expressed satisfaction over the successful completion of the zonal championship.

His word, 'The zonal championship was a success, but it was a build up to the National Finals which comes with high expectations because of the history attached to it. We are looking at the largest age-grade competition in the whole of Nigeria and Africa, more organized football artistry, team play, display of raw talents undergoing refinement, individual brilliance, command performance associated with Nigerian teams and players. It's a full package of fun and excitement for the football-loving Nigerian people, victories for teams and opportunities for the players and coaches.'

The Lagos National Championship will be decided inside the main bowl of the Agege Township Stadium which also hosted it last year. Aside determining the national champions, the championship will double as a qualifier for the ARS inter-country championship slated for Lagos next month.

The National Championship offers a platform to draw up teams to represent the country both in the male and female categories at the inter-country championship. Also, five most outstanding players during the championship will be picked to feature at an exclusive Arsenal football clinic for non-Man U countries.

Tournament partners, Youth Sports Federation of Nigeria (YSFON) and the Nigeria School Sports Federation (NSSF) are to lead an independent team of seasoned sports personalities including grassroots coaches to oversee technical concerns during the championship.

As part of the tournament, top teams from 17 African countries will compete against each other for the title of Airtel Rising Stars African Champion, scheduled for Nigeria in September.