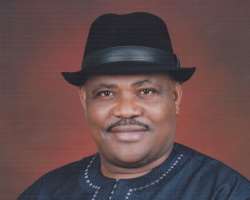 The Leadership of the Peoples Democratic Party, PDP, Rivers State Chapter has passed a vote of confidence on the Honourable Minister of State for Education, Barr. Ezebunwu Nyesom Wike, saying the Party has watched and participated in his activities from 2011when was appointed minister of state for state for education till date and is satisfied with the manner he has continued to pilot the affairs of the party in the State.

The Party in a statement signed by Jerry Needam, Special Adviser on Media to the State Chairman, Bro Felix Obuah, said the support and leadership of the Honourable Minister of State for Education has ensured the success and growth of the Party in Rivers State, a record that cannot be faulted or challenged by anyone in the area.

'It is in the light of this that the Party appealed to the President, Dr Goodluck Ebele Jonathan to discountenance unfounded claims and speculations by a faceless group on the Honourable Minister of State for Education, Barr. Nyesom Wike, and continue to trust and encourage him even with higher responsibilities in acknowledgement of his contributions to the Party and sustenance of our democracy', the Party Chairman said.

Meanwhile, the Rivers State PDP has expressed its disapproval of a document believed to have emanated from the impeached Deputy speaker of the Rivers State House of Assembly, Mr. Leyii Kwanee in which a non existing group under the aegis of the National Councilors Forum of Nigeria, Rivers State chapter calls for the sack of the Minister of State for Education, Barr. Nyesom Wike.

The Party says it is not happy that the former deputy speaker is using state's funds and resources in executing projects and taking actions in dragging the name of a man who has done well in the state to the mud, warning Mr kwanee and his allies to desist from using pseudo names in playing politics of calumny against the PDP and the leader of the party in the State, Barr. Nyesom Wike.

The Party therefore views Mr. Kwanee's action as retrogressive and undemocratic and also called on him and his co travelers to stop forthwith such defamatory actions, otherwise drastic and disciplinary actions will be taken against him by the Party.