Re-marry! It has never crossed my mind, says Agatha 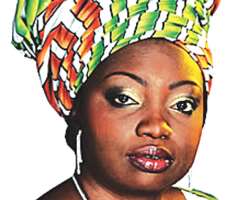 Agatha Amata, the talk show screen diva of Inside Out TV, is one of the few Nigerians who have dared to speak the minds of the masses. In this encounter, she bares her on issues bothering on her marriage, pet-project and darling talk show.

Through her talk show, Agatha irons out issues of moral decadence among the youths and women in society. For 14 years now, she has sustained the tempo and passion with which she presents national, cultural and personal issues on air. And this has continually warmed her into the hearts of many Nigerians.

Since the crack in her marriage with her actor/producer husband, Fred Amata, the 40 years old mother of two has moved on with life despite the odds.

“Well I've been doing some recording. Also, I launched my magazine called the Inside Out Magazine on my 40th birthday. It's motivational, inspirational and educational in nature. I'm also starting my NGO. It's a project I didn't want to go into. But for the situations around me, I knew I had to. I t's all about changing lives.

Since I've been into women and young people through my programme, I thought I should take it a step further by bringing people of like minds together to set up a foundation . We have individual partners who've been in support. Then, I still have my regular programme, Inside Out,” she narrated.

Talking about her childhood, Agatha thanked her father who until his death, according to her, strived to give his children the liberate to express themselves without fear or intimidation.

Her father, she recalled, taught her to be independent and vocal.“ When I left my dad and had to stay with my mum who was then working with the Nigeria Airport, she taught me all the values of living a good life. She didn't re-marry. Single-handedly, she raised seven of us! I can't remember her partying. And she always told us that we were her priority and made sure we went to school.

When, I look back as an adult and remember the sacrifices she made for my siblings and myself, I can't but thank God for her.”
'I remember that when I was in the university, guys couldn't come to ask after me at home. She always said there's time for everything. Because she made us realise how much she loved us, we knew she cherished us.

You needed to come to see what went on in our house then. It was a home for other children. Because my mum was a disciplinarian, other parents would bring their stubborn children to our house. So, I grew up knowing values and what's right and wrong. I grew up knowing how to care for other people who weren't in any way members of my family.”

“Talking, for me, is what I love. I've always believed in standing in the presence of so many people, express myself without feeling intimidated. So, I think it's a natural gift which I enjoy. Also, because of whom I was married to. I believe, God put people in place for his children to get to wherever they want to. Talking to me, isn't work but fun and that's why I'm what I'm today.

For Agatha, acting is not her profession. Not because she did not study Theater Art in the university, but because she does not possess the talent. “I can't act because I can't pretend to have experience in acting. Singing wasn't an option too. “My voice is horrible”, she said.
Could she be at the height of her profession? You may want to ask. “Like I said, the Inside Out Magazine is out. I grew up reading and loving the Readers' Digest and I wanted something like it.

I've heard incredible stories from Nigerians. In fact, in my 14th year of presenting my programme, I've been changed. It's been an education that no school of thought can teach me. Inside Out on TV isn't enough to pass across all the information.

So, I felt I should transfer all I've heard into a written form so that the common people can buy them and be motivated the way I was. It's unfortunate that there's no reading culture among the young people anymore. Everybody's busy partying!

So, I felt I should do something that'll be relevant, even in many years to come. And this is why the idea for the magazine and foundation came up. I know that when the time is right, God will open my eyes to see what I can do to make a difference.”

On her NGO, she said, “I'm going to do a formal launch of it soon. Asked where she hopes to take Inside Out in the next five years, Agatha said, “I want Inside Out wherever God says it'll be. I know what I want but it's only God who can take me there. I'll like it to be in a place where I'll have the feeling that I've done my best.”

Talk show, she said, “It's not like I'm earning the way I want but I thank God that I can feed myself and family, pay my house rent and take care of our needs. I'm comfortable. But it has been a very big challenging to me.”

However, Agatha's mood changed, the moment she was asked if she would want to re-marry again. “No, it has never crossed my mind.” she replied frowning. Adding, she said, “when I wake up in the morning, the only thing that cross my mind is how to take care of my children. So, the issue of re-marrying may come later, but not now.”