Beverly cheats on Angelo with Bimp? 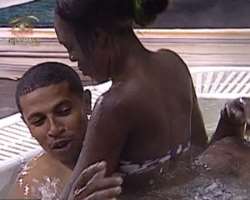 Shapataaa oooo! Our Nigerian BBA rep, Beverly is in the news again! and it's not for being nude or having s*x, it's for cheating!...yes..you heard me right.

Some days ago, the Angelo,Bimp and Beverly were relaxing in a Jacuzzi, Elikem and cleo were absent cause they were 'bonding' in the bedroom. moments later, Angelo jumped out and decided to call it a night cause he was already 'high'.

As soon as he disappeared into the kitchen, Beverly playfully pounced on Bimp and started gyrating on him like a cat in heat. All Bimp could do was just smile sheepishly as the sexy Nigerian stradled him and started rubbing her breasts and womanly folds against him.

Then she abruptly stopped before Angelo surfaced and she followed him into the bedroom. This gurl ehn! i hope she will not commit suicide when she comes back to Naija cause the shame might just be too much..#franktalk.