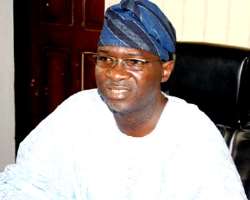 
Foremost rights group, the Civil Liberties Organisation (CLO), virtually stripped Lagos Governor Babatunde Fashola naked yesterday when it reeled out a catalogue of actions which it said cast the man in the mould of a lawless dictator who is absolutely inhuman and derives pleasure from suffering the poor.

CLO in a statement signed by its Executive Director, Ibuchukwu Ohabuenyi Ezike, went beyond the on-going deportation of non-indigene destitute by the Fashola administration to cite other evidence of Fashola's alleged wickedness and hatred of the poor. It named his victims to include but not limited to the workers, medical doctors, students, okada riders, taxi drivers, traders, hawkers, bus drivers, keke riders and human rights activists.

On the deported destitute, CLO demanded 'apologies to the victims and adequate compensations by the Lagos State Government.' Below is the text of the statement:

'The attention of the Civil Liberties Orgnaisation (CLO) has been drawn to the recent deportation of Nigerian citizens from Lagos state to Onitsha, Anambra State, few weeks ago and the comments that the nefarious action has so far generated from among Nigerians.

'During this period, too, we have received phone calls, series of text messages and mails from concerned Nigerians who feel that CLO has abdicated its responsibilities in voicing out against such cruelty and abuse of our grand norm, the 1999 Constitution and human rights. CLO has also been accused of keeping quiet because it is an infraction 'committed by its friends' in power. Such schools of thought reason that if it were a case involving the PDP, CLO and, indeed, other CSOs would have woken up to condemn the action.

'While we do not want to join issues with those making such spurious accusations, we make bold to state that CLO as a Pan-Nigerian and foremost human rights group, has since its inception in 1987, stood on the side of the people and will continue to do without fear or favour.

'On the issue on the table, CLO notes with utter dismay that the action of Lagos State Government in deporting Nigerian citizens from Lagos state to Onitsha and elsewhere in the country where they were allegedly 'dumped' like refuse is grossly reprehensible and condemnable. The action is not only a total breach of the 1999 Federal Constitution, the African Charter on Human and Peoples Rights and the United Nations Declaration on Human Rights, among others but  a huge infringement on the  human rights of the victims. It is criminal and dehumanising. Section 41 (1) of the 1999 Constitution grants Nigerian citizens the right to free movement without molestation in the land. It is also important to note that Lagos, apart from being a state, wears another identity status of a former Federal Capital Territory. And so, every Nigerian has a stake in Lagos state just like Abuja.

'When people who stay outside Lagos sing praises for his regime, residents of Lagos State who are the victims and who wear the shoes and know where they pinch them, do know that his government is despotic and lacks conscience. As at today, we cannot remember any segment of the Lagos population that is not lamenting the atrocities of the Fashola regime against its members.

'At the last count, the following groups of Lagosians have protested against Fashola's inhumanities, war against the armless citizens and wickedness. They include but not limited to the workers, medical doctors, students, okada riders, taxi drivers, traders, hawkers, bus drivers, keke riders and human rights activists. How many poor people's children can study at the Lagos State University today? Can taxi drivers buy new cars from other sources other than government's and get them registered as cabs in Lagos State? Do medical doctors know the types of drugs that are supplied in public hospitals in the state? The so-called Fashola buses in Lagos State now park human beings like Julius Berger trucks worse than the Oshodi-Osho buses.

'In view of the above, it is the position of the CLO that developments without human faces and which overlook human rights are undesirable projects.

'In the same manner, Yoruba citizens are said to have been deported to their states of origin while Yoruba communities like Makoko, Badiya and Isefun, etc, have also been willfully evicted from their God-given residences without alternative options. The war against okada riders, taxi drivers, traders and now keke riders in the state has only multiplied social crisis and hardship for the citizens instead of solving them as government had falsely made us to understand. Car, laptop and phone snatching has returned to town while kidnapping experiences which were never entertained here has begun to obtain. We no longer understand what security and social crises these anti-people policies are meant to resolve while, in the opposite, increased hunger, poverty, prostitution and frustration mount 'We have also decided to make this statement in order to dissociate the civil society community from the sponsored position of certain government apologists masquerading as civil society groups who rose to support the ungodly action of the government in the aftermath of the widespread national condemnation of the act. The group painted a picture that tends to absolve the government from this crime against humanity, our constitution and human rights.

'CLO condemns this action in its entirety and urges the Lagos State House of Assembly to urgently intervene in the matter and call Governor Fashola to order. Also, the National Human Rights Commission (NHRC) and the Nigeria Bar Association (NBA) have copious roles to play in ensuring that human rights and the law are not violated with impunity by governments and powerful persons in the society. Human rights and the law are abused because perpetrators are not brought to book. CLO enjoins the NHRC to begin to document incidences of human rights violations in Nigeria with a view to bringing the perpetrators before the International Criminal Court where they will not manipulate the process so that these impunities can abate and citizens' rights and our law respected.

'We insist that as one of the leading stakeholders in the struggle against authoritarian regimes, this is not the kind of government that we fought to install. Lastly, violation of human rights will continue until institutions and individuals entrusted with the responsibilities to check lawlessness and abuses live up to their duties and punish the offenders in line with the provisions of the law. Nobody is above the law and shall never be.

'CLO enjoins all men and women of good conscience, civil society organisations, the Federal government and its agencies and the State House of Assembly and the leadership of ruling party in the state to condemn this crime and take urgent steps to redress this ugly trend. Apologies to the victims and adequate compensations by the Lagos state government can help reduce rising tensions and found peace.'