H.E. T.A. Orji Commiserates With The Nigerian Union Of Journalists 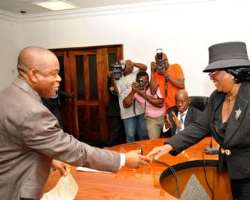 HE Governor Theodore Orji has commiserated with the Nigerian Union of Journalists on the death of its officers who died in a car crash recently.

In a statement by the Chief Press Secretary, Ugochukwu Emezue, the Governor described the incident as tragic and devastating.

Chief Orji who described the late NUJ members as highly dedicated, committed and highly professional in the discharge of their duties as journalists while on earth, maintained that their death has created a vacuum in the pen profession.

Chief Orji who stated that no one can question God on this issue sent his condolences to the families of the deceased and prayed God to grant their souls eternal rest.

He urged all Nigerians to keep praying for the protection of NUJ members whose job he said remains challenging and tasking.