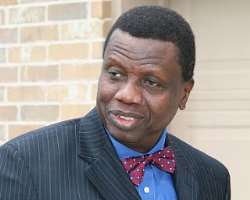 'It is only God that can help me to change things. Pray for me now that I am the sitting president of your country. Pray for me not to deviate from the fear of God,'.

These were the words of the president, Jonathan Goodluck when he besieged the Lagos/Ibadan Expressway Church of the respected man of God, Pastor Enoch Adejare Adeboye for special prayers.

There is no doubt that many believe that what transpired between the clergy man and the number one citizen of Nigeria definitely transcends prayer alone as we learnt they have a solid relationship that cannot shake.

A reason given on why Pastor Enoch Adeboye of Redeemed Christian Church of God has always be in support of President Goodluck Jonathan or has the habit of keeping mute on any national issue that concerns President Jonathan.

Sources close to the church have revealed to us that the relationship between Adeboye and Jonathan is more like a father and a very loved son; so it's difficult to see wrongs in a favoured son, said our source.

The very popular Pastor whose influence cuts across all boards of government especially in the southwest and beyond has over the years enjoyed good patronage from both state and federal governments using him to score political points in the process and win the support of his thousands of members scattered all over the country.

The story reaching us has it that, Pastor Adeboye has been made an unofficial spiritual leader of Nigeria from the Southwest and as such he has been placed on regular income. Though some may argue that the man of God is not a direct beneficiary of such fund but the fact still remains that it was actually because of the soft spoken pastor that such funds are made available. Another source in the church informed us that even if such should come from the presidency, it must be for the service of the church and not for the highly revered Adeboye.

Be it as it may, we gathered further that the regular income episode, we learnt was facilitated by a top Special Adviser to the President from the southwest who is also a member of the church . Though the Christian Association of Nigeria (CAN) which is the body that represents interest of Christians in the country also gets support for the organization from the government but Pastor Adeboye's income was according to information a special packaged that the federal government gives to some spiritual leaders perceived to be supporting them.

We gathered this money has been made regular since President Goodluck assumed office.

Meanwhile, it is also learnt that Pastor Adeboye pays all the pastors in the Redeemed fold. Our source who is also a worker in the vineyard of God told us that the pastor is a respecter of the labour law that stipulates 18,000 naira as minimum wage for workers.

The man of God has pegged his pastor's monthly salary to be N70,000. Every other month Pastor Adeboye pays out millions of naira as salaries to the pastors of Redeemed Church that has its tentacles spread all over the world.