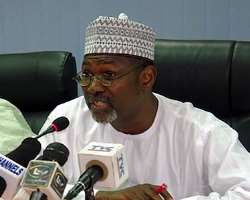 The Chairman explained that the voters' register used for 2011 General Elections was being cleaned up in all the states to avoid the use of Addendum Register, adding that 'from Anambra election, we will have no addendum register' for elections.

'As I speak with you, people are in the field cleaning up the register in Anambra state and I assure you that there will be no Addendum Register in
2015 starting with Anambra state'.

Professor Jega, while reacting to the issue of electoral offenders not being prosecuted, disclosed that arrangements have been concluded   to
prosecute   offenders   in Anambra   state before the commencement of Continous Voter Registration (CVR) in the state.

According to him, the Commission has instructed the Legal Unit in Anambra state to commence prosecution of electoral offenders before starting the CVR scheduled to hold between August 19 and 25, 2013.

He reiterated the commitment of the Commission to prosecute all electoral offences committed during 2011 elections but regret-ted that INEC has a small Legal unit that is always overwhelmed with a lot of legal matters and expressed the hope that the proposed Election Offences Commission, when established would help speed up the prosecution process.

The Chairman assured the group that the Commission would do everything possible to increase the involvement of youths not only in election matters but in other areas of national development adding that 'no nation can develop well without active involvement of the youth'.

Earlier, the leader of the group who is the National Coordinator, Youth Alliance on Constitution of Electoral Reform, Samson Itodo, commended the Chairman for his achievements in the 2011 General Elections and for appreciating the contributions of Nigerian youths by allowing a young Nigerian to develop the software used for voter registration in 2011.

He noted that the 2011 General Elections witnessed an unprecedented level of youth participation in the electoral process as demonstrated by the large turnout of people during voter registration and voting.

Mr Itodo said that the group was in INEC to find out its plans for 2015 elections, the CVR, constituencies delimitation and the distribution of Permanent Voters Cards and also how the young people could participate fully in the electoral process.

He commended the Commission for early preparation for 2015 elections and for producing a strategic programme of action for the election.

The Coordinator pledged the commitment of youths to work with the Commission in enlightening the electorate and requested for preference from INEC for the youths.

He had earlier expressed some concerns of the young people which included:
lack of access to information, viable communication interface between INEC and citizens, absence of youth data, impunity in perpetration of electoral offences and stereotyping of the youth as exponents of electoral violence.