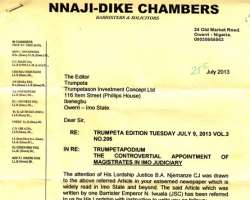 In my recent article titled 'THE CONTROVERSIAL APPOINTMENT OF MAGISTRATES IN IMO JUDICIARY' I recalled how in 2011, Governor Okorocha's administration in Imo State sacked four members of the Imo State Judicial Commission appointed during the Ohakim regime before the expiration of their constitutionally guaranteed tenures.

I also remarked that the sacked members went to court and were ordered to be reinstated. I also informed my readers on how the above judgment was not obeyed by the Imo State Government.

I also said that I interviewed all the re-instated members of the commission and they all said that the state Chief Judge as the Chairman of the Commission had never given them any notice of meeting of the Commission from 27th June 2012 till the time of this write-up.

I further drew the attention of the public on how some new magistrates were recently appointed and sworn in an alleged controversial manner without a known meeting of a constituted State Judicial Service Commission which is the body that is authorized to appoint magistrates.

I also wrote on how some persons claimed that persons who never applied for the magisterial jobs were also among those appointed magistrates. I also drew my readers attention on how members of the Nigerian Bar Association Owerri Branch condemned the way the new magistrates were appointed and sworn in.

I have always said that I am not among those who would seek to go to the bench as a magistrate. Therefore, I did not apply for the said magisterial job and do not have interest to apply in future. This is because I derive more job-satisfaction advocating for the injured, oppressed and victimized.

Be that as it may, it is regrettable and unfortunately that I have been marked for victimization for exposing the perceived rot in the Imo Judiciary. But I will not be deterred because it is my vocation both as a lawyer and a journalist to contribute to social engineering.

Recently, the Chief Judge of Imo State Justice B.A Njemanze wrote me through his lawyer threatening to file a libel suit against me for exposing the flaws in the Imo Judiciary. If people like late Gani Fawhenmi could fight social ills during military regimes, then our own fight during civil rule is nothing that we should worry much about. God shall see us through.

Interestingly, after the publication of the above referred article in the media, more facts have started emerging on the said alleged shoddy appointment of the new magistrates in Imo State. It was gathered that whole process started in 2009 with the sale of forms to prospective applicants for the posts of magistrates in the state at the rate of =N=5,000 per form with a mandatory payment of at least =N=50,000 for tax. Subsequently, during the early days of the Okorocha Administration, more forms were also sold and about 312 applicants were short-listed. These short-listed applicants later sat for a written examination and about 202 applicants sailed through.

These 202 applicants were further subjected to an oral interview. Unfortunately, before the exercise was completed, the State Judicial Service Commission was dissolved by the Okorocha Administration and four members of the commission were illegally replaced before the expiration of their tenures.

These sacked members were later re-instead by the court but this judgment was not obeyed or enforced by the leadership of the state judiciary. Recently, 25 persons were 'secretly' issued with appointment letters as new magistrates and hurriedly sworn in a 'kangaroo' style.

From the shocking revelation contained in documents made available to the press, out of the 25 new magistrates, only five persons were among the people initially who sat for the recruitment examination.

Ironically, the son of the state Chief Judge, the fiancé to the state Deputy Governor etc. were among the controversial new magistrates. As a result, many lawyers are crying that the appointment was a day-light robbery on meritocracy, justice, equity and fairness.

Many are of the opinion that allowing many of the magistrates who were allegedly appointed in a shoddy manner to man the courts of justice may be injurious to the judicial system in the state as nothing good they say, could come from shoddy process, injustice and illegality.

It is even a bigger irony that the Imo Judiciary that is now being accused of grave injustice and foul-play was once headed by renowned jurists like the retired Justice Chukwudifu Oputa.

How are the mighty fallen!
Therefore, it is the opinion of yours truly that the entire process that brought about this saga should be reviewed and injustice corrected so as to restore the integrity which the Imo Judiciary used to enjoy in the past.

The time is now for tomorrow may be too late