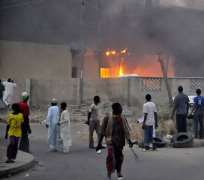 SAN FRANCISCO, July 30, (THEWILL) – Controversy has continued to trail the casualty figure of the Kano explosions released by the Police and the Army on Tuesday.

Though both the Police and the Army confirmed that 12 persons were killed in bomb-blasts that rocked the Sabongari area of the metropolis, investigation has revealed that many people actually died in the attacks.

Recalling the experience on the hospital bed at Abdullahi Wase Specialist Hospital, Mr Alade Ezekiel, 47, a survivor of the attack, said “at about 9 p.m. on Monday, I came out to take a plate of Amala; all of a sudden, I heard a deafening sound, and before I could come to realities, a sharp object pierced through my left hand and blood gushed out. Another bomb exploded and before I could manage to escape, another object pierced into my leg. At this time, I could not move, but the only thing I could do was to crawl when a soldier came to me and rescued me.”

Condemning the attack, the Kano State governor, Mallam Rabi’u Musa Kwnkwaso , in a statement issued by his Media Manager, Halilu I. Dantiye, said: “Governor Rabi’u Musa of Kano state has strongly condemned last night’s (Monday) multiple bomb blasts at New road and Enugu road in Kano city. The governor, who visited the scene of the attack early this morning, described the incident as devastating, stating that it is an attack on the whole of Nigeria.

“This attack on Sabon Gari is an attack on Nigeria because Muslims and Christians are involved. Several people of different ethnic extraction have either lost their lives or are critically injured. Whoever did this thing targeted Nigeria”, Kwankwaso stressed.

“Governor Kwankwaso, who visited Murtala Muhammad Specialist Hospital in Kano city to commiserate with the hospitalised victims, promised that the state government will shoulder the cost of their treatment.

“He therefore directed the state Commissioner for Health to ensure that the victims get the best of treatment in public or private hospital in the state.

"The governor extended heartfelt condolences to the families of those who lost their lives in the incident, praying Allah to stand by them in this moment of sorrow.”

A statement signed by the spokesman of the Kano Police Command, ASP Magaji Majia, said : “Multiple explosion at Enugu/Igbo Road and New Road at about 2100 hours occurred at a Tavern known as Mary Cool and Zuma Cool Spot, respectively. As a result, 12 died on the spot, 12 injured, 19 vehicles parked at the scenes were damaged. Corpses and the injured were taken to Government Hospitals in the state. We are still monitoring events as investigations remain on progress.”

This came as the 3 Brigade, Nigerian Army, Kano, confirmed 12 persons dead in the explosions.

multiple terrorist attacks on Sabon Gari, an enclave carved out for non-natives.

A statement signed by Captain Ikedichi Iweaha, spokesman of 3 Brigade said: “At about 2105 hours 29 July 13(five minutes after nine pm), sounds of simultaneous explosion were triggered by persons suspected to be members of the boko haram terrorist group between numbers 38 - 41new road and igbo road by enugu road all in sabon gari area of Fagge Local Government Council of Kano state. Twelve persons were confirmed to have died from both incidents while a couple of others who sustained various degrees of injuries were rushed to hospital for medical attention.

“This latest incident could have been avoided if citizens maintain vigilance to observe when packages are dropped as it was in this case contrary to reports circulating in some section of the media of the attack being one by suicide bombers.

"You may recollect that the JTF had urged residents of Kano metropolis to keep an eye on their environment as members of the terrorist sect had planned to drop packages in bags or cartons in areas with high human traffic.

A statement signed by the President of Ohanaeze Ndigbo in Kano, Chief Michael Tobias Idika , said: : “On Monday, July 29, between 9 and 9:30pm terrorists invaded Sabon Gari, an enclave carved out for non-natives and planted Improvised Explosive Devices (IEDs), which exploded almost simultaneously at Enugu/Igbo Road, near International Hotel; and on New Road, directly opposite the popular Ado Bayero Square—precisely at No. 38, 39, 40 and 41.

“At 41 New Road, the Christ Salvation Pentecostal Church was also bombed at the peak of evening worship. Ohanaeze’s account can confirm 39 deaths in New Road and six in Igbo/Enugu Road; and also unspecified numbers of people who got injured. The team of Ohanaeze Ndigbo, Kano state chapter arrived the scenes at about 9:30pm and witnessed the moving of dead bodies and the wounded by security agencies, mostly the Army.

“Ohanaeze Ndigbo, however, can recall that this is not the first time terrorists invaded Sabon Gari, particularly on New Road. In fact, on that same spot where the latest incident happened, several attempts have been made to terrorize Nigerian citizens. As a reputable organisation, we call for adequate security of lives and property in northern Nigeria.

“Ohanaeze Ndigbo also commends the spirited efforts of the Assistant Inspector General of Police, David Omojola in-charge of Zone 1, who was accompanied by the Commissioner of Police, Musa Daura to the scene of the incident for on-the-spot assessment.

"However, without fear of contradiction, Ohanaeze Ndigbo Kano registers its deep feelings over the unprovoked attacks on Sabon Gari, Kano, dominated by Ndigbo. At this point, Ohanaeze Ndigbo call on President Goodluck Ebele Jonathan to make haste and protect the lives of citizens resident in the northern part of the country, particularly, in Kano with undisputed status of boosting economy and politics in Nigeria.

“To all the departed souls and the wounded in this grievous attack, we register our deep sympathy and only hope that those in authorities, including all security agencies would brace up and take decisive action to end this carnage—man’s inhumanity to man.”