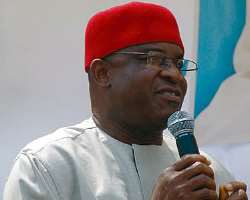 SAN FRANCISCO, July 30, (THEWILL) – The Senate President, Senator David Mark, has promised to intervene in the row between the Federal Capital Territory Administration Minister, Senator Bala Mohammed, and the management of the IBB International Golf and Country Club over certificate of occupancy (C of O) of the complex.â€¬ â€ªThe FCT administration is alleged to be demanding the sum of N255 million from the management of the club for the C of O to legalise and authenticate the acquisition of the land.â€¬

â€ªBut the management of the club led by its captain, Debo Olateju, said on acquisition of the complex , the FCT then issued the club with Right of Occupancy (R of O) instead of C of O.â€¬

â€ªOlateju, therefore, pleaded with the Senate President who is also an avid golfer to wade into the matter since the facility is just for recreation and public utilities and not necessarily a commercial venture.â€¬

â€ªHowever, the Senate President promised to look into the matter with a view to addressing the matter.â€¬

â€ªMark ,in a statement issued on Tuesday by his Chief Press Secretary, Paul Mumey, charged the new executive of the club to bring in new ideas that would further promote the club. He said the club has over the years earned respect and reputation.â€¬