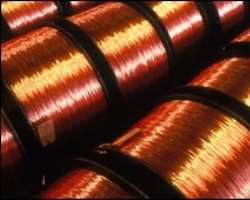 Uncertainty over the impact Chile's earthquake will have on copper production is likely to mean higher prices, according to analysts.

Chile is the world's biggest copper miner, and although officials have promised to honour its export commitments, supply worries remain.

Production at four major mines was suspended – affecting around 20% of the country's capacity.

Chile's mining minister said it could take two days for production to resume.

Risk premium
Aside from the direct impact of the disaster on the mines themselves, there are other factors that could slow the production process, such as transport and power supplies.

Jonathan Barratt, managing director of Commodity Broking Services, said: “People will start to build in a risk premium early on Monday. That will remain for as long as uncertainty exists and things like assessing the impact on fuel supplies and so on will take some time.”

On Friday, the main three-month copper contract closed at $7,195 a tonne.

One Singapore trader was quoted saying the price could rise to $7,400.