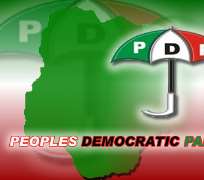 A statement by the party’s acting national publicity secretary, Barr. Tony Caesar Okeke, said the leadership of the party approved the composition of the mommittee based on the provisions of Articles 57 (1), (2), (3) of its constitution.

The committee’s inauguration would be done by National Chairman of the PDP, Alhaji Bamanga Tukur, “at a date to be announced later”, the party said.

Members of the Committee are as follows: