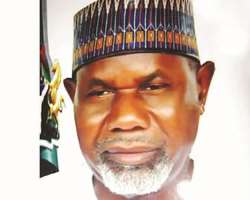 
A dangerous spin has been added to the cold war raging in Taraba State between Acting Governor Garba Umar and his hospitalised boss, Danbaba Fulani Suntai.

The Presidency and top officials of the Peoples Democratic Party (PDP), are reportedly inundated with reports that Umar has embarked on a Jihad or religious war in the state.

In a swift reaction, however, Umar’s Chief Press Secretary (CPS), Mr. Kefas Sule dismissed the allegations as “a tissue of lies.”. He maintained that his boss is an unwavering loyalist of Suntail, and wouldn’t do anything to hurt the hospitalised governor.

Victims of Umar’s alleged Jihad are Christian appointees who, incidentally, were appointed by the hospitalised Governor Suntai, himself a Christian.
Umar is a Muslim, and member of Izalla, a deeply religious sect of the religion.

In July alone, he sacked no less than 11 top appointees of Suntai. All of them are christians, fuelling the belief the religious cleansing theory.

But for the recent diclosure by Governor Gabriel Suswam of Benue, that Governor Suntai would be back in office soon, argue Umar’s critics, ” the man would have completely dismantled Suntai’s political structure.”

Interestingly, Agyo was reportedly undergoing chemotherapy in far away Israel, for cancer, when news of his sack hit the airwaves.

On his part, Health commissioner Mustapha Hammangabbo got a soft landing as his sack was reportedly converted into resignation. Sources claim that Hammangabbo was given the preferential option of resignation because he is a Muslim and son of the powerful ruler of Gashaka.

Not so fortunate were Joshua Augustine, and Mannaseh Kaura, special advisers on revenue and  border development respectively.

Last Thursday, the sack Tsunami swept from office two additional advisers- Tonyonga Binga (education), and Joseph Magaji (rural development).
Acting Governor Umar had described the purge as not only necessary, but in compliance with a resolution of the state House of Assembly.

A statement from the governor’s Chief Press Secretary, Mr. Kefas Sule, said the sack followed a resolution, the day before, by the state Assembly on the report of an ad-hoc committee set up by the legislators.

The report, said Sule, indicted the sacked officials for failing to properly account for a N400 million federal government flood disaster relief fund.
The sacked commissioners have since gone to court to challenge their removal from office.

Sources close to the sacked officials told Pointblanknews.com that none of the indicted officials was invited by the ad-hoc committee to state their defence.

They accused the acting governor of using the Assembly report as a smokescreen to target loyalists of their hospitalised boss.

Another told Pointblanknews.com how Umar nudged the legislators to set up the ad-hoc committee few weeks after Suntai suffered a plane crash.

“The committee took off and then went into a coma. It was only a few week ago that we heard rumours that the committee had resurrected and roaring like a lion.
“Even at that, none of the indicted persons were invited in the spirit of fair hearing. The committee sat in camera and, pronto! they presented their report,” he explained.

Continued the commissioner; “Let us dissect the drama. The governor sacked us barely 24 hours after the House resolution. This should earn a place in the Guinness Book of records as the fastest compliance by the executive arm of government with a legislators’ resolution anywhere in the world.”

The political situation in the state is enveloped in uncertainty. The surviving loyalists of Suntai claim that they no longer feel safe remaining in government.

“The current joke on the streets of Jalingo and elsewhere is how Umar has turned Taraba government into the Big Brother Africa show.
“Each week, commissioners and advisers are nominated by the housemates, sorry, House members, for eviction. The press secretary follows up with the announcement,” one of the sacked officials claimed.

He listed last week’s sack of two advisers as proof that the acting governor was out for religious cleansing.

“Last week’s sack of Tonyonga Binga and Joseph Magaji. Their sack came a month after the kangaroo committee submitted its report, and nearly a month after the Assembly resolution. Their names were clearly not among the indicted. However, from the blues, their names surfaced.

“They invited both advisers and, scratching their heads, stammered, ‘sorry, we just discovered you were supposed to be part of the indicted officials. Can you now please do us a favour by resigning?

“Of course, they refused to resign. And sensing that they would not yield ground, Umar’s goons pushed him to fire them. That is the kind of impunity we have in Taraba today,” the adviser claimed.

He also claimed that most of the officials who dragged the state government to court over their sack have gone underground “for fear that anything can happen.”

He alleged, “Most of us have received crank phone calls, with the callers threatening us if we did anything to embarrass His Excellency. We see ourselves are marked men, what the Late Idi Amin would call Obote men.”
However, Umar’s spokesman dismissed the allegations as lies designed to paint his boss in bad light.

He accused the sacked officials of seeking to divert public attention from the monies they misappropriated.

“True, my boss was chairman of the main committee. But they headed several sub-committees and were given various sums of money totalling N300 million. The remaining N100 million was kept aside to help rebuild structures destroyed by the flood,” explained the press secretary.

He continued, “When complaints starting pouring in that there was little on the ground to show for the monies released, the House of Assembly sought to probe the fund. It was their report, not ours, that indicted the officials. The acting governor did not have a hand in the report,” he said.

The press secretary held that the probe was entirely handled by the legislators, so he and hiss boss could not have determined what procedure to apply.

On the haste in complying with the House resolution, Sule said delaying to implement the legislators’ resolution would have created the impression that his boss was out to shield people who short-changed flood victims from justice.

Sule expressed regrets that his boss could be accused of treachery when, in fact, he remained “very, very loyal to his boss, Governor Danfulani Suntai.”
He stressed that since Suntai’s accident, his boss has been religiously continuing with the same projects initiated by the former.

“The projects and programmes have remained the same. Those who accuse my boss of disloyalty don’t know him very well or the meaning of loyalty. They are the ones who have not been true to themselves,” he declared.