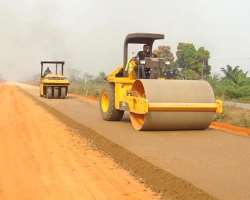 The opposition party in the state of Osun, the Peoples Democratic Party, PDP is used to making mountain out of molehills, particularly now that the 2014 gubernatorial election is approaching. They have raised alarm once again on issue as important as the urban renewal efforts of the ACN/APC-led administration to redirect the once rustic and subordinated city on the part of sublimity and florence.

The campaigns of calumny started a few days ago when they seek to thwart the state government's determination to expanding the major roads, creating walk-ways and beautifying the road shoulders in the heart of the state's capital. Osogbo is one of the carefully planned cities in Nigeria by the colonial masters with several metres of spaces between the roads and residential buildings. Over time, the people saw the need to encroach unto the land and erect make-shift stores and containers of hues into the open space illegally, thereby making unwholesome and ugly spectacle of the once admirable and beautify city and several others cities undesirable spots for recreation.

It is this unbearable and ancient outlook of Osogbo that the PDP in the state is applauding as a modern inheritance to sustained at all costs and bequeath to the next generation. Fortunately, the previous administrations before the coming of Ogbeni, including the PDP's, have all marked the shanties along the major roads for demolition. They knew it would bring about economic revamp to the city and its environs, as it is everywhere in the world, yet they lack the courage, commitment and capacity to bring its realisation to fruition.

Urban renewal is a well-known phenomenon across the globe and it is geared towards the recreation of environment, reconstruction of social housing areas and shopping malls. Sometimes, it is directed at the improvement of run down neighbourhoods, clearing and upgrading of slums where necessary. The purpose in most cases is to undo the damages done to the environment or re-claim spaces for spatial interventions.

As a pre-industrial political party, the PDP minders relish modern days towns and cities that are developed across the globe with their magical influences and their tourist attraction, yet they rather travel to those cities and fantasise about them to the people than to replicate same for our economic growth. The total neglect of the state and its people by the PDP for almost 8 years in power is not merely their lack of vision, but criminal expropriation of our common wealth. They did't intend to develop the state and at the same time, they are angry with anyone who has the ball to do so.

That Governor Rauf Aregbesola has pull down substantial part of his campaign secretariat located along Gbongan-Osogbo Road a few metres away from the PDP state secretariat is a clear indication that the governor's motive is beyond selective demolition which they are trying to make of it. The PDP thugs who resisted state government personnels carrying out the road expansion vowed to disrupt law and order if the demolition took place. Wielding weapons and chanting anti-government songs, the PDP members said the planned demolition was in bad taste, adding that the PDP was not given any demolition notice.

Osun State PDP Chairman, Alhaji Gani Olaoluwa, who said the planned demolition was political, maintained that the state government was uncomfortable with PDP’s popularity in the state. A member of the PDP, who craved anonymity, said, “When they saw our weapons and our battle readiness to combat them, all their policemen and OYES cadets ran away.” The member, who was at the PDP secretariat when the demolition was thwarted said, “We are not ready to allow them to demolish our secretariat. The ACN is afraid of our popularity and the location of our secretariat. We will defend our secretariat with our blood.”

Obviously, the PDP have never hidden their disdain for rule of law none shy away from the fact that they are agents of plunder, chaos and anarchy. Their allegations are unfolded as the notice served to them contravenes their claims. It's on record that they were served with a notice of demolition last December. It's clear from the foregoing that the PDP intention bothers solely on their usual cultivated falsehood and insincerity. Any forward looking individual or group who knows Osogbo before now will appreciate the beautification exercise of Ogbeni's government and would crave the continuation of the efforts.

The only engine rooms of development in modern days societies are tourism and production. Osun-Osogbo Festival is one example where well over 250,000 tourists throng to catch their fond at the UNESCO designated tourist site, annually! In this respect, the state government has established garment company that has employed hundreds of youths, Opon Imo company as well as RGL company. The industrial quest of the state government has immensely expanded the frontiers of economic growth in the state in less than 3 years plus of Ogbeni's administration. The ACN/APC administration has also embarked on building airport in the state, comprising helicopter and aircraft hangers where they can be repaired. This project which will be delivered in the next 12 months will be the first of its kind in Nigeria and West Africa.

It will be obscene in the face of these mammoth infrastructural development to retain these thinning, chaotic and horrible lanes of misery in the present day Osogbo. The development of any state - to start with - be they road expansion, urban renewal, school reconstruction, hospital rehabilitation, walk-way extension and the likes are in the lager interests of the younger generation. But instead of applauding the good work of the governor they are practically engaged in pillaging and stone-walling. The development of the State of of Osun is for the future generation to enjoy and will take everyone's contribution to materialise.

Though, the governor reserve the rights to treat those who have their containers removed along the road sides as mere tenants at will, but he elected to compensate them so as to resettle and prevent them from becoming destitute on state, not mind the fact that some of them were given quit notice for upwards of one and half years. The question bugging the minds of those who knew Osogbo in the past has been that how come we refused to build on the colonial masters aesthetics designs of a modern city with long set backs from the roads? How come we parade numerous degrees today and we cannot replicate what the less educated colonialists achieved then in our environment so many years after?

The reason is that those who blundered into the governance of the state before now have been unable to separate politics from governance and development. Their resistance of the road adjustment is not borne out of their love of the state or the people, it is incumbent on their fading fame to gain relevance, fight their dislocation from power and relaunch themselves unto same where aberration is seen as the grand norm. Now, the PDP is lofting and sermonising about the plights of the downtrodden as if they mean well for the people. It is all gimmicks to snatch the voters voices in 2014 election and turn around later to deride and deprive them of their bases of life on assumption of office. They did it in the past and the people are saying: "NEVER AGAIN".

Thankfully enough, the people are already appreciating and cooperating on their own by helping the government to remove the illegal structures to pave way for the expansion project. The message should not be lost on anyone. The people inhabiting those lowly places in the name of trading or residency know that their beings are sullen with the worst of humanity.

Every human being has the same feeling of life: social, political and economic security. Whether you leave in Osun, London, Kano, Edo, Enugu or anywhere in the world the plights are the same. Pain, poverty, blight, subjugation, misery, and even hopelessness are the same as well as human enhancement, enjoyment, bliss and merriment anywhere in the world. We hope that Osogbo, like every other capital city of the world has its own uniqueness and peculiarity in terms of modernity!