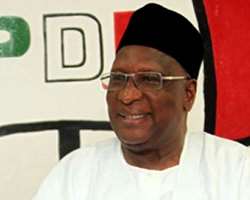 SAN FRANCISCO, July 27, (THEWILL) – The ruling Peoples Democratic Party (PDP) has stated that the national chairman of the party, Alhaji Bamanga Tukur, and the national officers of the party were not sacked by the July 25 ruling of the Abuja High Court which stopped the planned special national convention of the party.

A statement issued on Saturday by the acting national publicity secretary of the party, Barrister Tony Caesar Okeke, said the affected national officers had actually resigned their positions with regard to the Independent National Electoral Commission (INEC) report at the National Executive Committee (NEC) meeting of the PDP on June 20.

The statement noted that despite this, there have been several interpretations regarding the implication of the ruling on the status of the National Working Committee (NWC) of the party as presently constituted under the chairmanship of Tukur.

The statement read: “ The leadership of the Peoples Democratic Party (PDP) has thoroughly considered the Thursday, July 25, 2013 ruling of an Abuja High Court ordering our great party not to hold the August 31st Special National Convention pending the determination of a suit before it, challenging the mode of election of some national officers in the 2012 National Convention.

“The said suit followed an INEC report which questioned the process of the election of the national officers at the 2012 National Convention.

It is however public knowledge that the affected national officers resigned their positions with regard to the INEC report at the National Executive Committee (NEC) meeting of the PDP on the 20th of June 2013.

“However, since the ruling by the Court, there have been several interpretations regarding the implication of the judicial pronouncement on the status of the National Working Committee (NWC) of our party as presently constituted under the Chairmanship of Alhaji Dr. Bamanga Tukur CON.

“For the avoidance of doubt, the ruling of the Court is clear. The Court pointedly ruled that the PDP refrain from proceeding with the conduct or convocation of the Special National Convention pending the determination of the suit filed by the aggrieved members.

“It is instructive to note that in its wisdom and in line with the principle of justice, the Court turned down the prayer by the plaintiffs for an interlocutory injunction nullifying the appointment of acting members of the National Working Committee (NWC). The Court also threw out the prayer requesting it to restrain the National Chairman, Alhaji Dr. Bamanga Tukur ,CON, from performing his roles in the NWC until the determination of the suit.

“We assure our members that the leadership of the party and the functions of the NWC are in no way affected by the ruling. The ruling did not in any way affect the office of the National Chairman or those of the acting national officers of our great party.

“Nevertheless, our lawyers are presently studying the Court ruling and will advice the party leadership on the next course of action in that regard.

“We therefore urge our members to continue to remain calm as it is obvious that the party will come out of its challenges stronger that ever before and better prepared for victory in the 2015 general elections.”