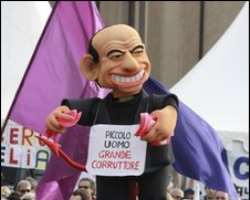 Ten of thousands of Italians have demonstrated in Rome against Prime Minister Silvio Berlusconi, over what they say are attempts to evade justice.

Mr Berlusconi is on trial in two corruption cases but legislation being discussed in parliament would in effect stop him going to court.

The protesters accuse the PM of seeking to undermine the legal system.

He says he is the victim of political persecution by the judiciary, which he recently compared to the Taliban.

Some demonstrators carried banners reading: “Enough, the law is the same for everyone.”

“We are starved of legality,” said Angelo Bonelli, head of Italy's Green party. “Today, the real Taliban is Berlusconi who wants to tie the hands of the magistrates.”

On Friday, Mr Berlusconi told supporters there was “a subversive aim” of bringing down his government.

“If the prosecutors don't like a law then they challenge it and it gets rejected by the courts,” he said. “We are in the hands of this band of Taliban.”

The exchange prompted President Giorgio Napolitano to call for calm.

Mr Berlusconi is on trial for allegedly bribing British lawyer David Mills into providing false testimony in previous trials, and for alleged tax fraud relating to business before he entered politics.

Two bills being considered by MPs would suspend legal proceedings.