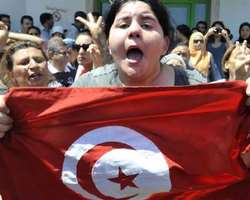 
Tunisian opposition party leader Mohamed Brahmi has been shot dead in the capital, Tunis, in the country’s second political killing this year.

Protesters have gathered in Tunis and other cities across the country calling for the government to resign.

Tunisia’s largest trade union has called for a general strike on Friday and Tunisair has cancelled all flights to and from Tunisia for that day.

Mr Brahmi, 58, led the nationalist Movement of the People party.

Prime Minister Ali Larayedh condemned his assassination, but said: “We are against all calls to dissolve the government to create a [power] vacuum.”

An uprising in Tunisia in late 2010 kick-started a series of revolutions that spread through the Middle East and became known as the Arab Spring.

But there has been deep division between Islamists and secular opponents since the revolution, the BBC’s diplomatic correspondent James Robbins reports.

Many Tunisians, particularly the young, complain that their quest for secular democracy has been hijacked by intolerant Islamists, including the Muslim Brotherhood which forms part of the current government, our correspondent says.

‘Cowardly crime’
Gunmen on a motorbike shot Mr Brahmi in his car in front of his wife and daughter on Thursday morning, Movement of the People party officials said.

Local media reported the assailants fired 11 bullets at the politician. It is not known yet who was behind the attack.

The family of Mr Brahmi has accused the governing Islamist Ennahda party of being behind the killing.

The party has not responded to the claim, but released a statement expressing “sadness and shock” at the “cowardly and despicable crime”.

Mr Brahmi’s wife, Mbarka, and her daughter Belkis were joined by angry Tunisians outside the hospital in Tunis where the politician died.

Large crowds also gathered in front of the Ministry of Interior in the capital in protest at the killing.

Meanwhile, reports are emerging of police firing tear gas to disperse demonstrators who allegedly stormed a local government office in the southern city of Sfax.

And demonstrators are said to have attacked Ennahda’s headquarters in Sidi Bouzid, Mr Brahmi’s hometown and the birthplace of the Arab Spring.

Tunisia’s prime minister said Mr Brahmi’s murder was aimed at taking advantage of the upheaval in Egypt, where President Mohammed Morsi was recently ousted after mass protests against him and his ruling Muslim Brotherhood.

“This is aimed at pushing us into the unknown, whether it is chaos, fighting, civil war, or the return of tyranny,” Mr Larayedh said in a televised address on Thursday evening.

‘Tide of violence’
The killing came as Tunisia celebrated the 56th anniversary of becoming a republic after gaining independence from France.

Human rights organisation Amnesty International said the killing was a “blow to the rule of law in Tunisia”, which was experiencing a “worrying tide of political violence”.

Mr Brahmi founded the Movement of the People party after the 2011 revolution.

He was also a member of the National Constituent Assembly, which is drafting a new constitution.

The assembly announced Friday would be a day of mourning.

Mr Brahmi was not as big a political figure as Mr Belaid, but he too was a leftist critical of Ennahda.

The party has faced growing popular unrest over a faltering economy and a rising extremist Islamist movement.

After Mr Belaid’s assassination in February, many Tunisians accused Ennahda of not doing enough to stamp out a rise in Islamist violence, with some critics saying the party was actively fomenting it, correspondents say.